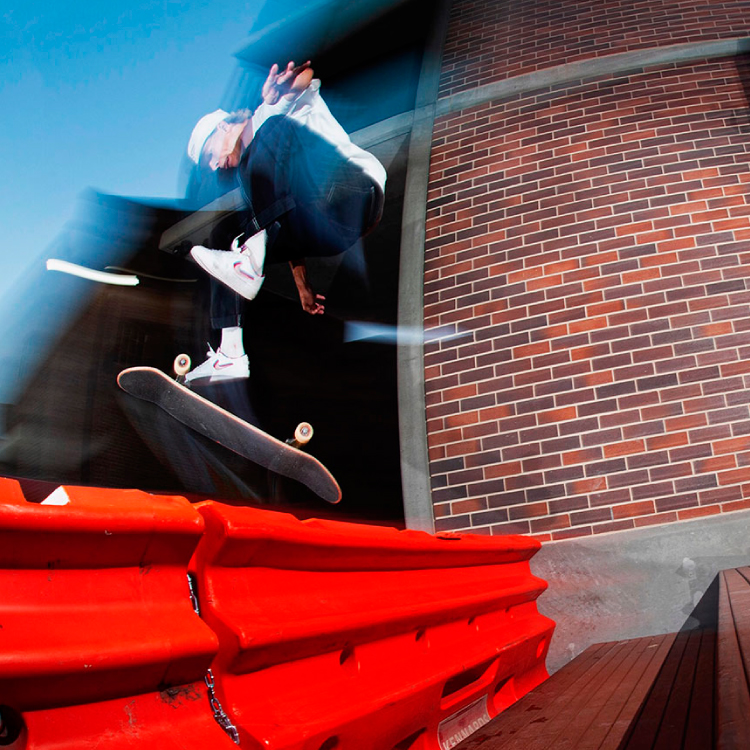 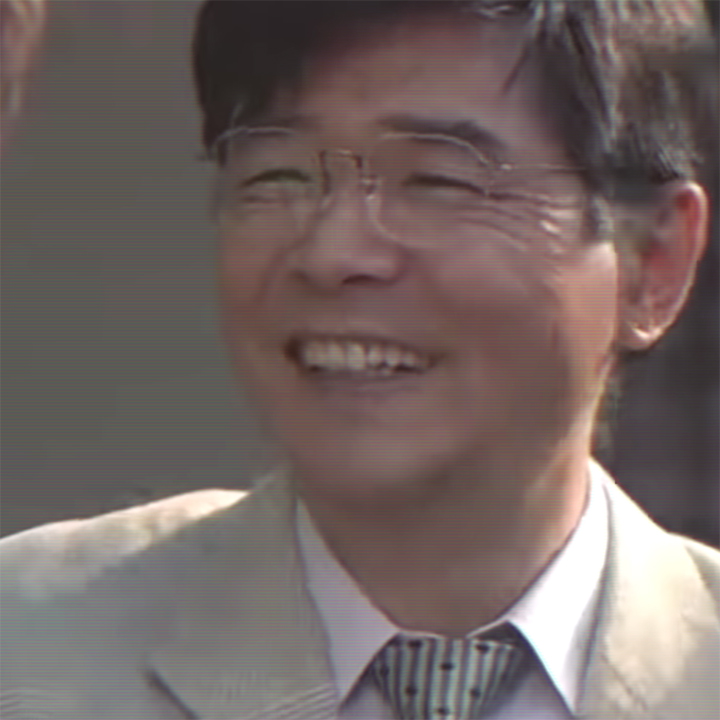 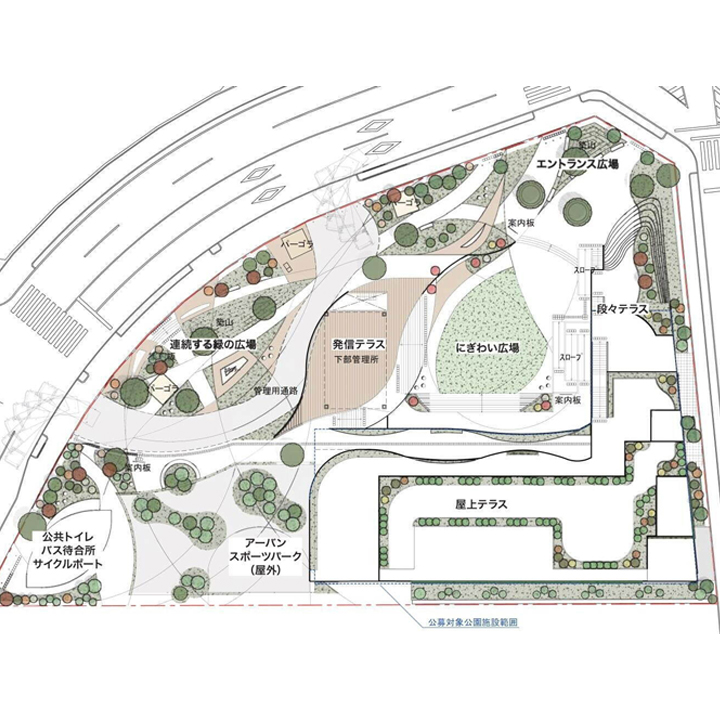 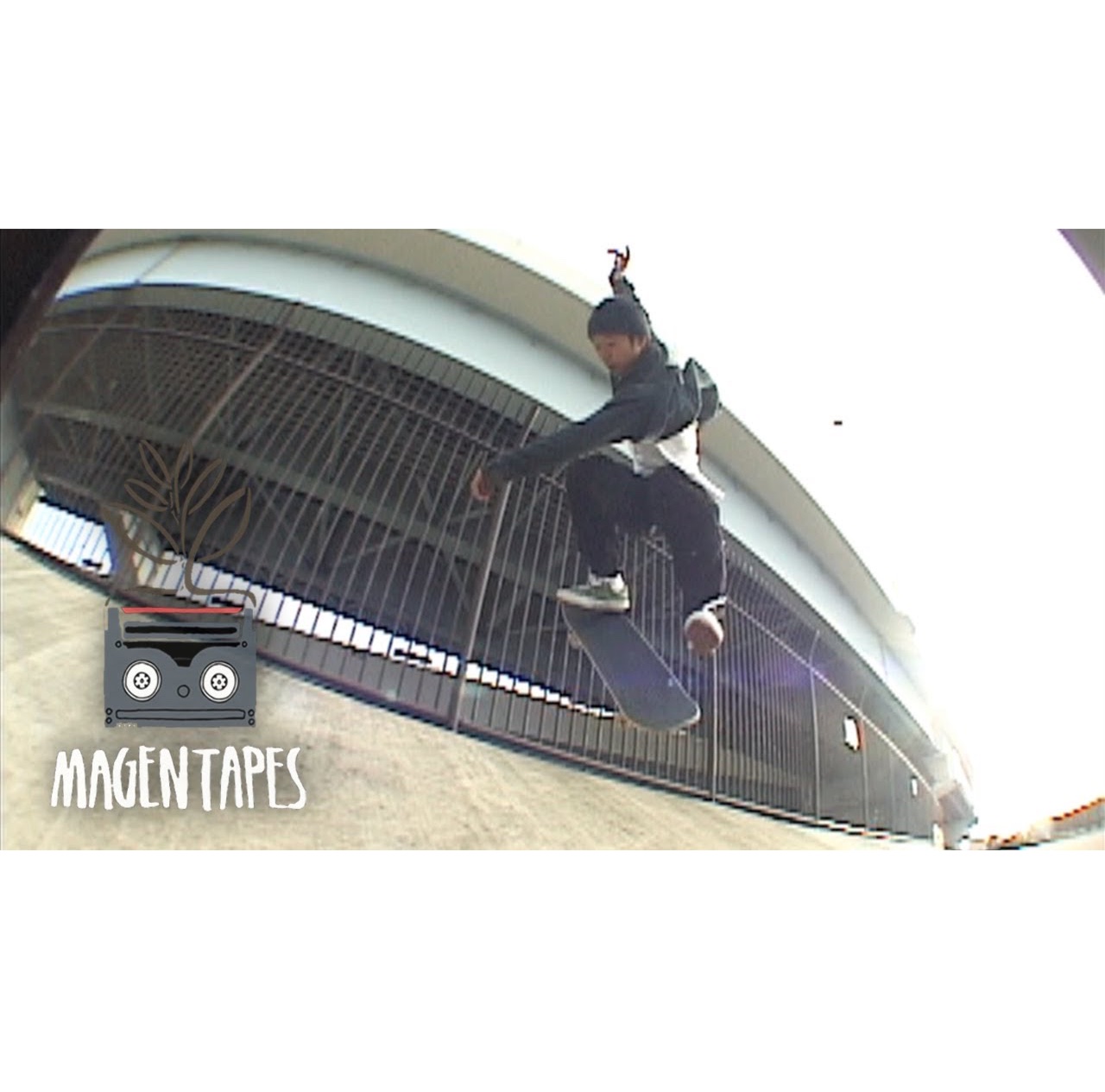 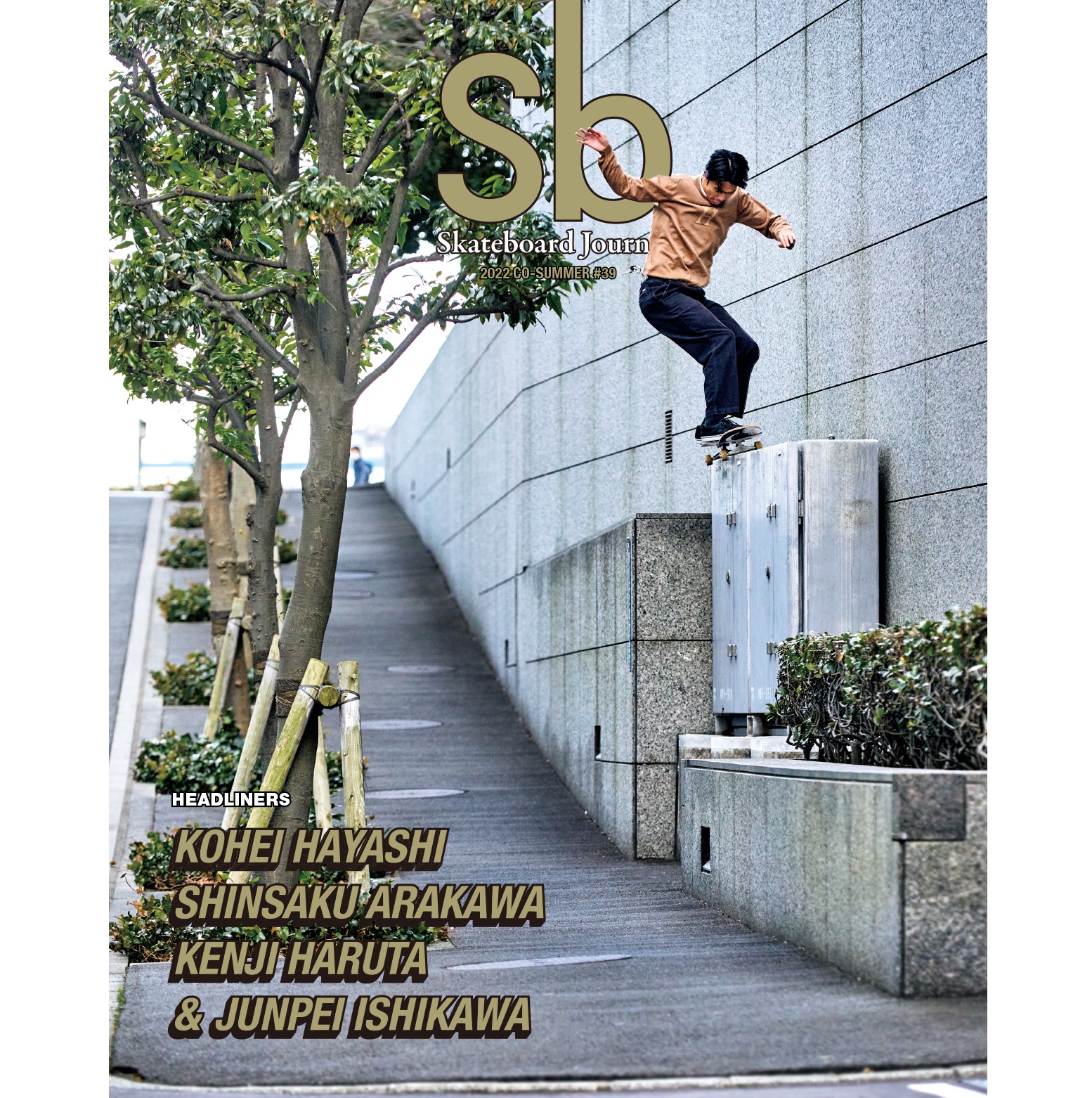 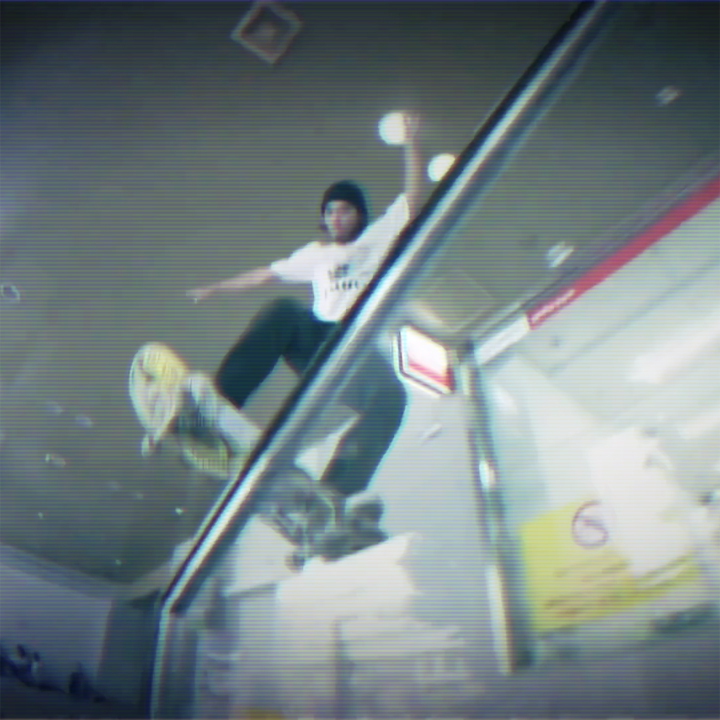 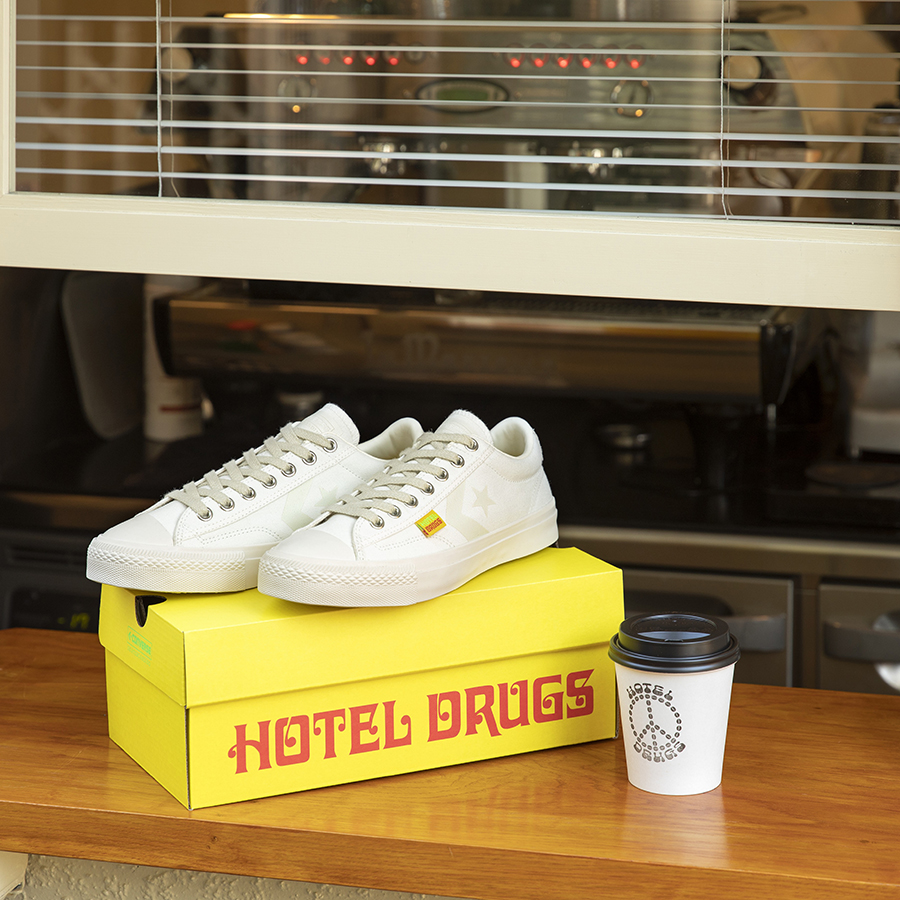 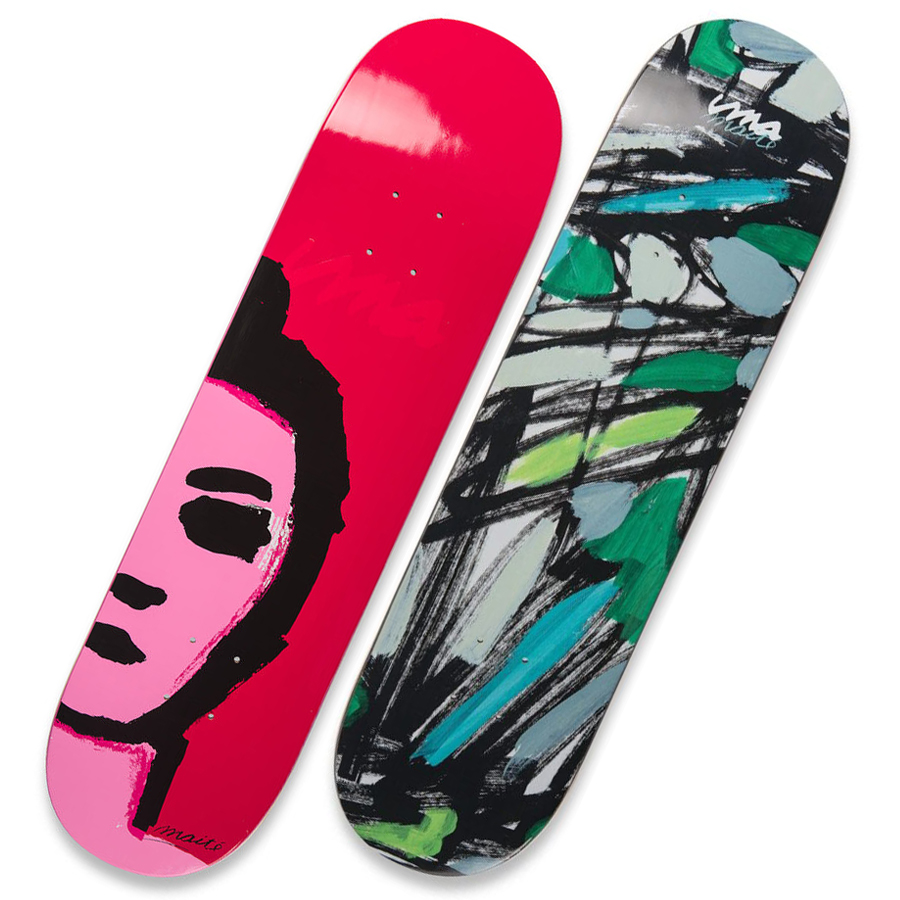 Todd Francis had made numerous graphics with social and political message. We sat down with the man while he was live painting in Yokohama at Stance event.
──TODD FRANCIS (ENGLISH) 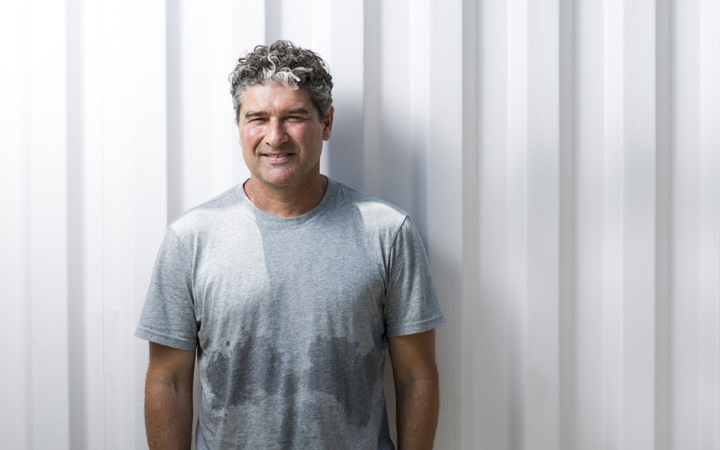 VHSMAG (V)： I want to go through your work history in skateboarding, real quick. You started out at Deluxe in '93?

Todd Francis (T)： Yeah, '93, '94. And I was there, from then until I left San Francisco in '99. I worked in-house at Deluxe. Real and Spitfire and Stereo were already going, and I was there, maybe, a year after I started was when they started Antihero.

V： You're responsible for the Antihero logo.

T： When Julien and John started Antihero, I was the art director there at that point. They didn't really have a choice. They had to work with me, and we tried a few different things before we landed on the eagle. We did the pigeon, before that we did a plane crash and all these other things that we did for the logo before the eagle. It's pretty funny the guy who ran Deluxe, Jeff, he waited until Julien and all the team was on tour, and no one had cellphones, this is '95, '96 and then he said "Hey, let's scrap everything else, let's do a new logo." so they had no say in it. That's how the eagle became the logo. T： Yeah, I moved back to LA and I was still doing some graphics for Antihero. I've been friends with Natas for a long time, he was riding for Element and he was doing a lot of graphics for Giant. He was doing all the New Deal graphics as well as a lot of Element graphics. And he brought me in and ... cause I love him, I love working with him, he's extremely talented. And we worked together on a whole bunch of New Deal stuff and then he left to go work at Quicksilver and I decided I'd keep doing it.

V： And eventually you went back to Deluxe.

T： I did. I guess it's about eight years ago. They were still all my friends. I'd been in touch with them all along and sort of feeding them graphics ideas occasionally and so it just made perfect sense. And Julien and I have always worked really well together and it was a very easy fit.

V： You've put out so many graphics. What's your favorite?

T： I don't really have favorites. When somebody asks me that my usual answer is the Stranger K9, the one where the police officer is getting bitten by his own dog. I always liked that one because of the message it sends, the color, and also the fact that's a Julien board. He's my favorite and so it has all those key elements. 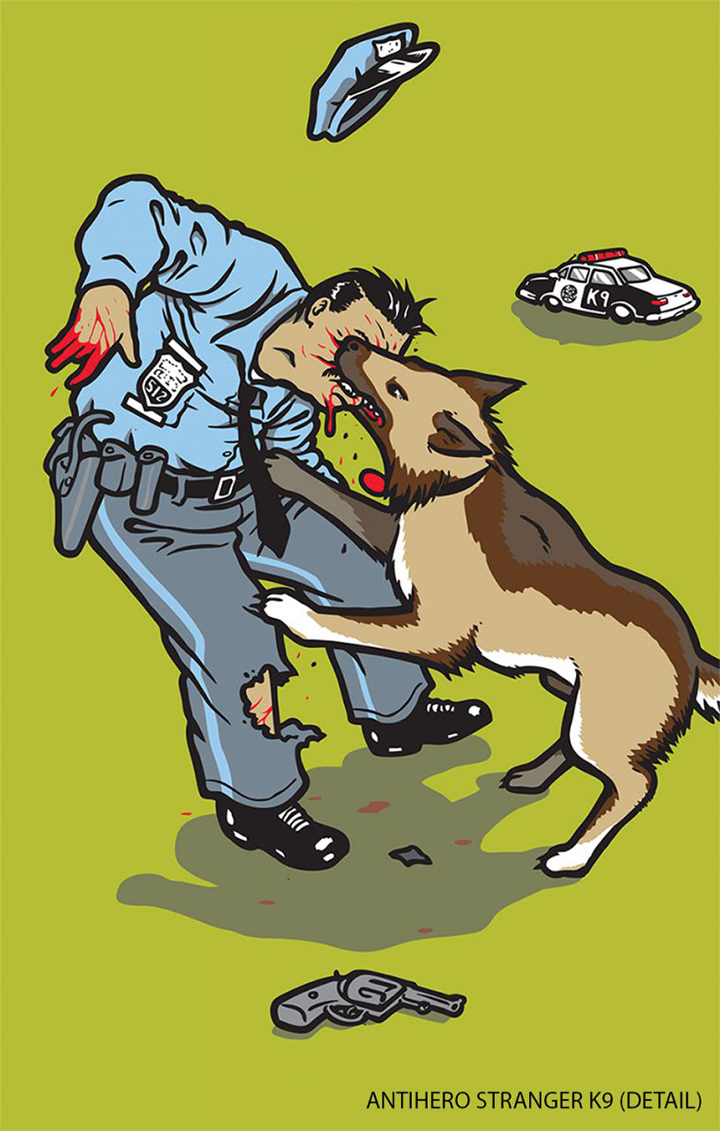 V： How did those sarcastic, that political, provocative style of graphic come about? Did it evolve over the years or was it there from the very beginning?

T： I think it was kind of that way from the very beginning. And that's something that Julien and I have always had in common, sort of statement driven stuff, and political stuff. He's not one to just do decorative beautiful work. He wants it to mean something and say something and hopefully make some kind of difference in some way. Not in a rise up sort of political poster way, but in more of an angry, poetic way I guess. We've always sort of shared that. Some of the first graphics we did with Antihero had some of that vibe going and we just got better at it as we went. A lot of the early Antihero stuff that I was doing just wasn't very good cause we were just figuring ourselves out. Chris Johanson did some amazing work though. He did the first graphics and Jef Whitehead did some amazing work early on. That stuff was great, but when it was up to me to do most of it, a lot of it was hit or miss.

V： What would you say is the most provocative graphic you've ever done? Have you ever gotten in a sketchy situation because of it?

T： Well, we got sued. We got sued by fast food companies for the Eat Shit And Die series. That was fairly provocative. That provoked them. And there's been graphics that we've done that maybe didn't go over very well in certain parts of the United States, anti-religious stuff, graphics about bestiality jokes and that sort of thing. I did a whole series of boards that just featured shit, it just featured poop, and that wasn't always very welcome. I don't know if there's any single most provocative one. I mean the fast food one got us in the most trouble I guess, which is not something to really celebrate cause it's a major pain in the ass to get ... its an expensive undertaking. What we're trying to do is hopefully make the world a little bit better place.

V： What's the reason for making provocative graphics? What are you trying to convey?

T： I think the main goal is to make people think. It's not just to shock people or to make them upset. It's to make people think. And at the core of the company is Julien Stranger, he's an incredibly intelligent person who's very thoughtful, and very thought out. And he sets the bar very high in terms of philosophy and a set of goals, and my job is to keep sort of reaching for that bar, trying to jump over it. The goal really is just try and make something of a difference, as strange as it sounds when you're trying to sort of send a message from a skate shops wall. What we're trying to do is hopefully make the world a little bit better place, and maybe make people laugh along the way too.

V： You say from the skate shop wall but your work has been shown outside of skateboarding as well, like Penthouse magazine.

T： Yeah, I mean there's a lot of other things that I get to do. I get to do art shows and that sort of thing but it all comes from Antihero. That's the backbone to everything else that I do and I spend easily half of my time either working on Antihero or thinking about it. I always start with that because that's really the most important part of it. And then the work that I do for art shows or other stuff, it's not too far from that. There's always hopefully a good idea in there and a message and maybe something, maybe a laugh as well.

V： How did that Penthouse thing come about? How did you break out from the skateboard community?

T： Well, the beauty of it is I didn't have to break out. They reached out to me. The managing editor of Penthouse at the time knew my work, and he's someone who knows about street wear and skate world so he knew my work. He just reached out to me out of nowhere and said "Hey, I'm managing editor of Penthouse and I want to bring you in, I like your work." It was a pretty easy conversation to have.

V： Do you feel there's a difference between working for skate company and non-skate company?

T： Well, we get to get away with murder in skateboarding graphics. We get to do whatever we want especially with Antihero. Sometimes I lose track of that. If someone who's not in skateboard or streetwear world comes to me for a project, some of the ideas I'll throw at them are too much.

T： Yeah and also they as individuals are more restrained. I give them the stuff and they think that there's something wrong with me. They think I'm a monster. And I just forget because I just work a sort of a certain way and spin off of that. There's times when I'm told, "That's funny, but it's too much, let's do something else." And I'm not completely deranged... I've raised daughters, I know how to turn it down. But my first thought is always to go do something really crazy, and occasionally they make me turn down the temperature a little bit.


V： So you're in Japan with Stance. How did you start working with them?

T： Well, mostly just out of luck. Like pretty much everything else in my life. One of the founders was a guy Ryan Kingman and he was sort of the secret sauce at Element. He's the one who put together and then managed the team at Element, and he and I have been really good friends now for about 20 years. We really enjoy working together and he's just the greatest guy. He was one of the people that created Stance and he said "Hey, I always want you to be involved," and now they're stuck with me.

T： I mean the socks are the most memorable stuff, and they're the stuff that gets seen by the most people. But getting to come to Japan and do a project like this, or I got to go to Brazil last year and do it. That's sort of magical stuff. I've spent my whole life making artwork that goes on products, and it's a huge honor... But getting to travel and meet new people and do my work in these different environments and experience different cultures, that's the most memorable stuff, is that kind of adventure.

V： You obviously have the punk mentality. Do you still see that in skateboarding today?

T： Yes and no. At its core it's something that's generally illegal. You know it's illegal and does damage to things. What's more punk than that? And also it's just a completely alternative lifestyle. It's not a wake up and go to your job every day kind of thing. It's, in that sense all of it is. But there's varying degrees of a sensibility that fits within that. I mean I think at that core is just being different and doing things differently. And I think that's what everybody in this world is doing for the most part.

We still have that love for that feeling and the love of that reaction when we're putting these things out there.

V： What keeps you in Skateboarding for all these years?

T： I love what I do and I love the challenge of coming up with new ideas and a lot of it comes down to me loving working with Julien Stranger. Me trying to make him laugh, and trying to make each other laugh. And neither he nor I are young any more but we still have that love for that feeling and the love of that reaction when we're putting these things out there. We've got these riders that are very young and love what we're coming up with. We haven't aged ourself out yet because we can still speak to them and identify as them and we're both just total children. I think as long as your brain remains young or at least immature maybe there's hope. I just haven't gotten kicked out yet.

V： Anything lined up in the near future?

T： There's a lot. I think there's three new Antihero series' coming out in the next few months. I always have a lot of Antihero stuff. I always have upcoming projects with Vans, upcoming projects with Stance and then art shows. We just finished series of art shows with Porous Walker and we're probably going to do some more stuff with that, it was called FOOLS. That was really fun.

Born and raised in Los Angeles. Started woking as artist in skate industry in early '90s, known for provocative, humorous and political work. He's currently art director at Antihero and one of the punks & poets at Stance. 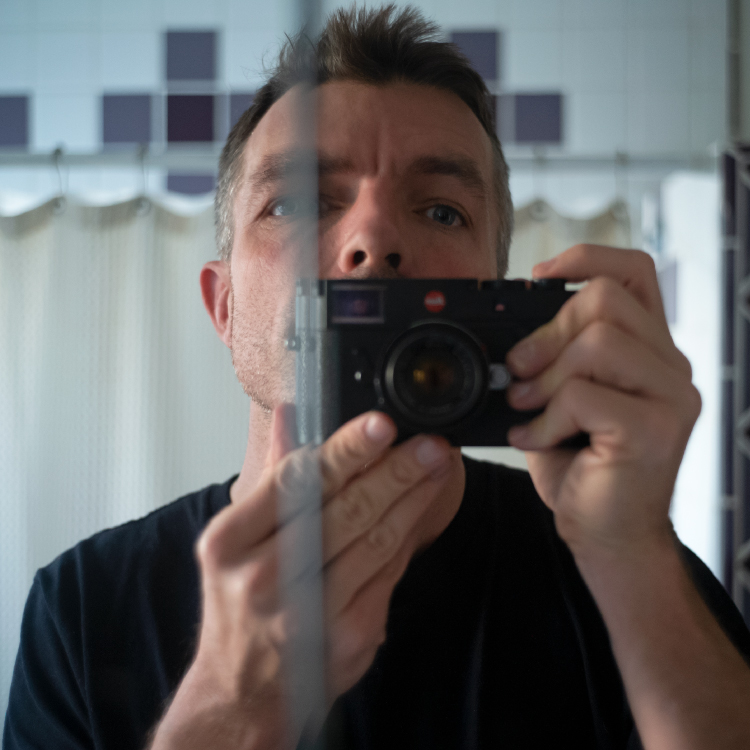 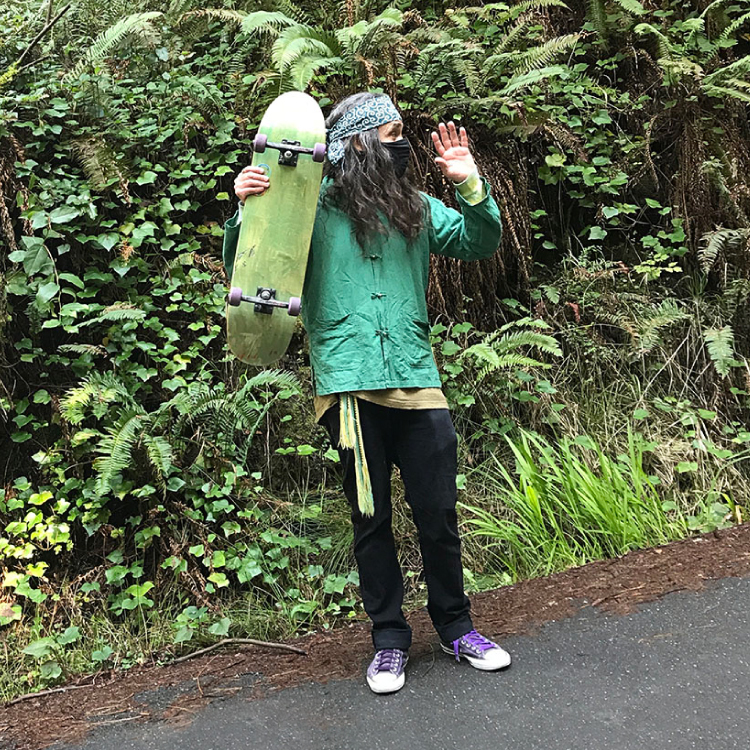 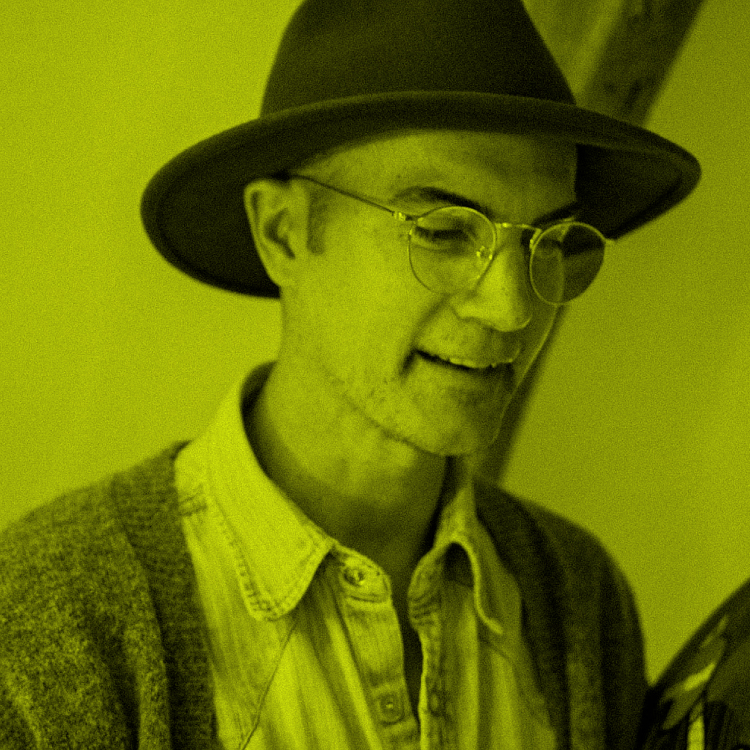