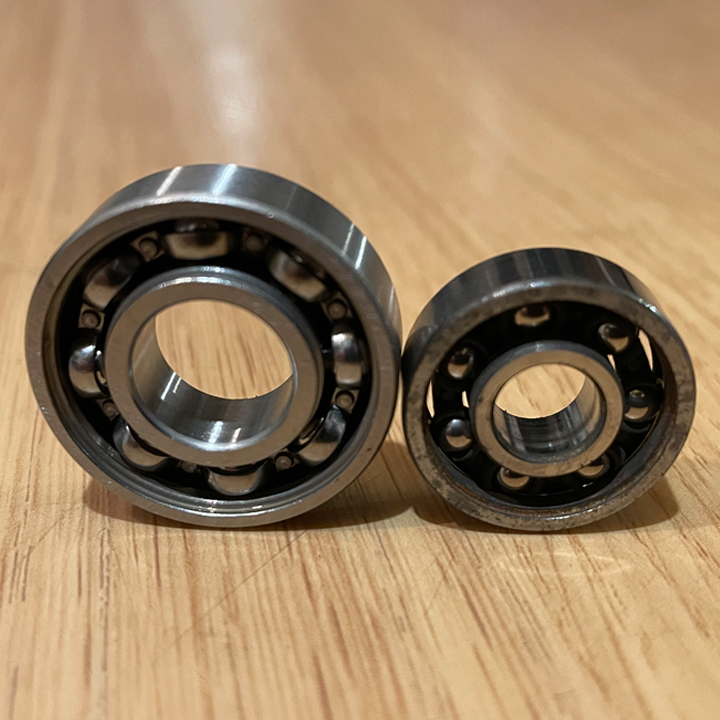 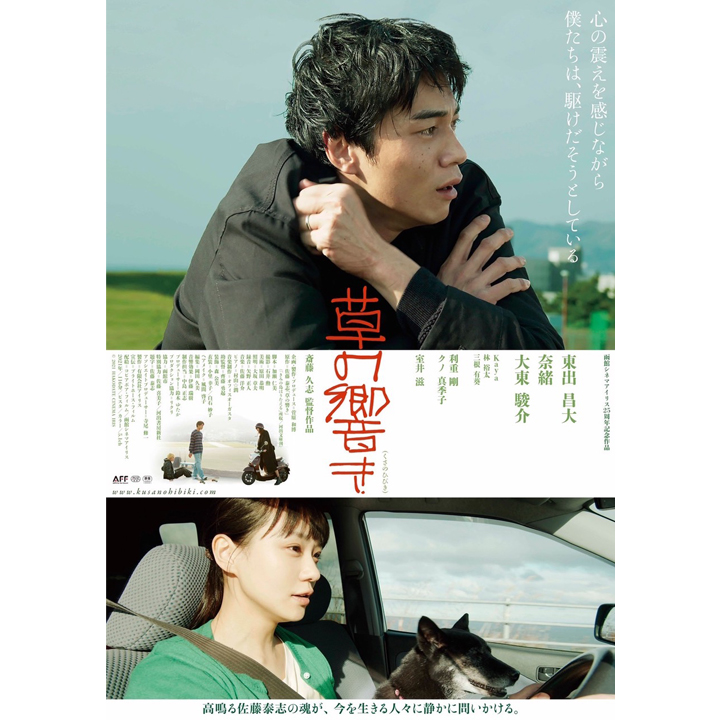 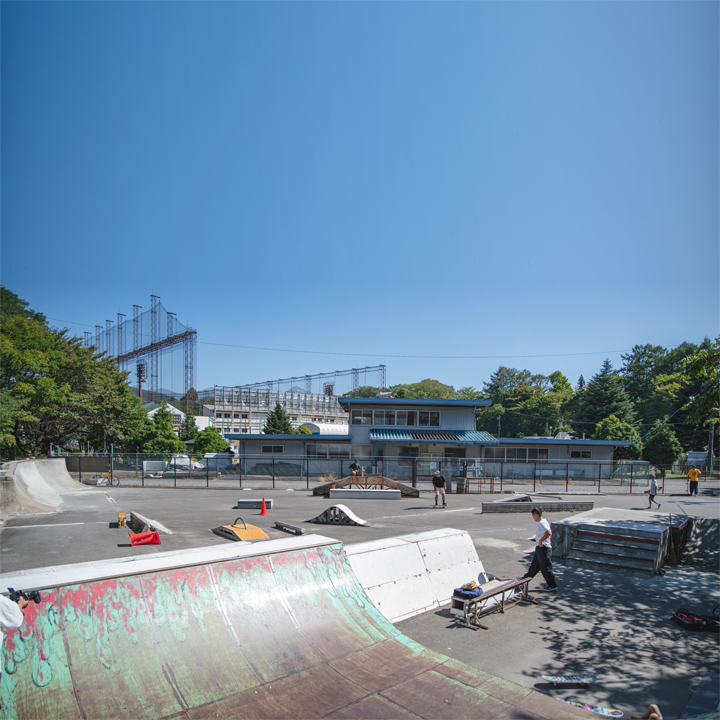 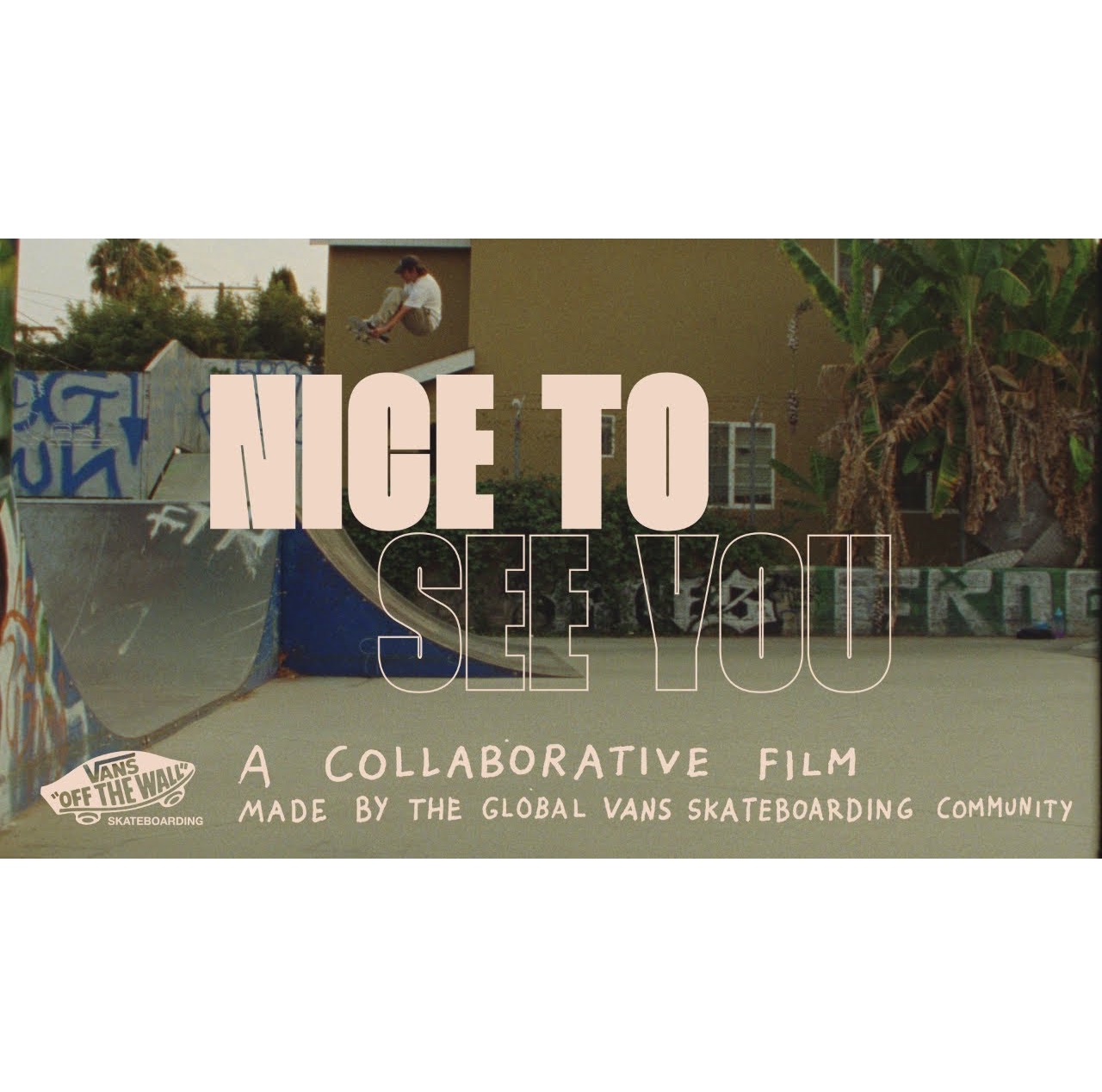 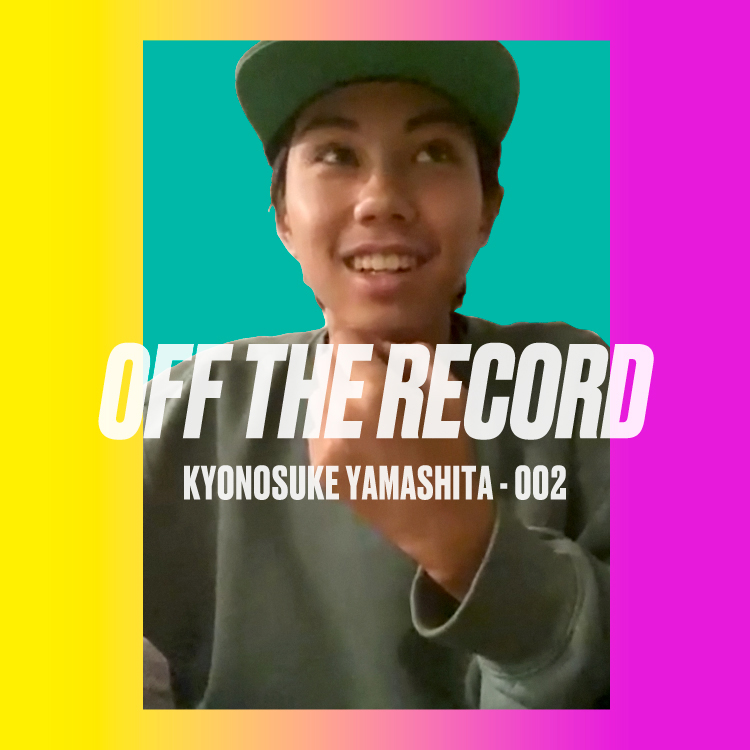 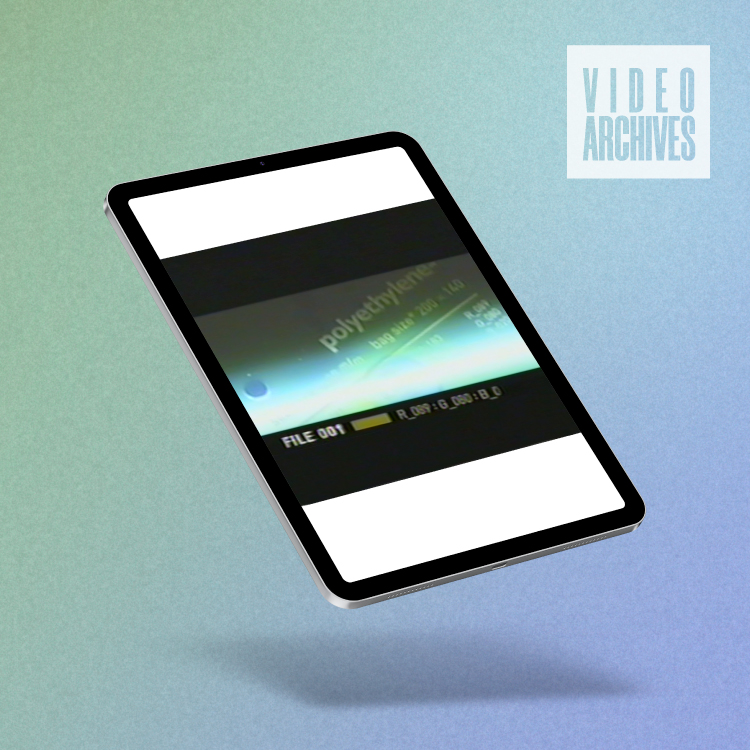 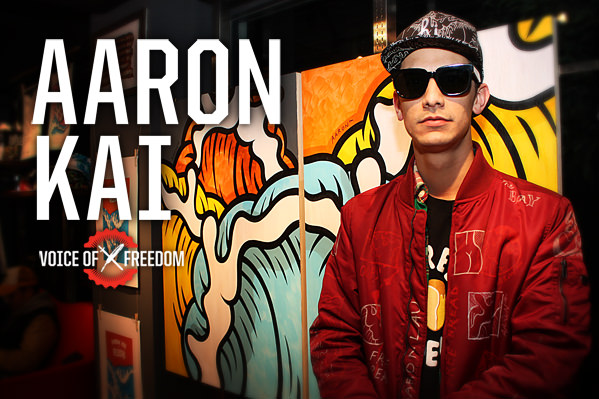 A collection with a Hawaiian post-pop artist, Aaron Kai has released from Official. We sat down with Aaron and asked questions about his start as an artist and his work while he was in Tokyo for the Pacific Rim Tour to promote his collection.
[JAPANESE / ENGLISH]

Interview by VHSMAG Photos by M3000 Special thanks: Sonik Distribution

VHSMAG(V)： Firstly, how did you get into art?

Aaron Kai(A)： I left Hawaii and moved to San Francisco to go to a film school when I was 18 and decided that I didn’t wanna do film. I’d been doing art my whole life but the defining moment that made me believe that I don’t need to do nine to five was when I sold my first painting. I sold it for like a $1,000. At the time, I was like “Damn, this is awesome. If I can sell two of these I’m good for a month.” Then about a month later I evaluated my financial situation and decided that I can quit my day job. That’ll give me eight hours to spend on my art. So selling that first painting helped me break through and gave me the confidence to be an artist.

V： Was that at a gallery or somewhere?

A： No, me and two of my friends, we were eating Japanese curry at this spot in San Francisco. Three of were talking to the guy at the curry spot and we were wearing Bape hoodies. We were into Bape back then. Anyway, the guy used to collect Bape and shoes. He got interested so I showed him my art saying this is what I do. He asked me how much it was and I just said $1,000. He was like, “Really? That’s all?” and he bought it. I should have told him $2,000 (laughs). So that’s how I sold it. Then a few weeks later I ended up selling another bigger piece for $2,000. Also one of my friends from Hawaii who owns a restaurant asked me if she could fly me to Hawaii to make painting for her restaurant. So I just quit my job. I was in Hawaii with no job and became a full time artist.

V： When was your tipping point as an artist? Every artist needs to put yourself out there and get recognition.

A： I think getting collab opportunities from established brands, like this one with Official. Also painting the wall at The Hundreds was a big thing for me too. When me and my manager started working together we tried our hardest and we actually got featured on HYPEBEAST four times in four months. And it all started with The Hundreds wall. So it’s kinda like support from brands like The Hundreds and Official.

V： When you work on your art, how does it work?

A： When I paint a wall, I go with a pencil and draw arches first. From there I make waves in the arches. Then I do the lightest colors first and work my way up to the darkest colors. Then obviously finish with the outlining. To me it’s an easy process and makes sense but it’s all in my head. It gets hard when I don’t have a sketch and try to tell a friend who’s helping me what to do. It’s a lot of time management too. The hardest part is managing yourself and not wasting time. And at the end of the day when the piece is done, no matter if you yelled at your friend, you feel like we worked on this beautiful thing together. This is us.

V： How do you keep yourself motivated?

A： I just wanna amaze people. They’re not gonna be amazed by the same thing. Ultimately I feel I just gotta keep working because eventually one day I wanna be the best. For me, it’s not a matter of keeping myself motivated; it’s a matter of trying to be the best. What can I do today that’s gonna get me a step closer to being considered one of the great artists of this century? So that’s my motivation.

V： Where did your style, the wave, come from?

A： I used to surf before and after school in Hawaii. I was horrible at school and had really bad grades. I didn’t give a sit either. To me school didn’t make sense. So when I was in school I would be just drawing waves all day because I wanted to be back at the beach. In Hawaii, every boy who surfs would be drawing waves. So even when I moved to San Francisco I just kept drawing waves. People liked the waves and told me stick with it. I’m from Hawaii, I surf, and my last name is Kai, which means ocean in Hawaiian so it all made sense.

V： How did this Official collab come about?

A： They just shot me an email. Me and Jason (Peret) from Official, we had some mutual friends in the bay area so we just hit it off from the start. So from there we just taking meetings and made the collection pretty fast. But a lot of my projects for me stems from social media like Instagram.

V： Which one is your favorite from your Official collection?

A： I like all of them but I really like the Black Wave Buckit hat. It’s black on black, felt on cotton. The day after I had the first meeting with Official, I was looking for a design inspiration and went to Barneys New York in San Francisco. I wanted to make a hat that looks high-end and was looking for materials. I saw some white button-up shirt with black felt on it. I thought I wanna do that but do black on black. I like the Birds of Paradise pattern and a lot of people like the Waves of Women too.

V： Any project in the works?

A： I’m planning a big gallery show in Los Angeles later this year. All the remaining pieces that I don’t sell on this Asia tour, I’m gonna send it back home and use it for the show. I’m also working on a web series that’s gonna premiere on The Hundreds blog, and will have collection with them. I’m just gonna keep it moving and go elsewhere and continue to spread my work.

V： You’re still in your mid twenties and traveling all over the world. Is there anything you want to achieve through art?

A： I wanna be able to show people that you can do what you wanna do and live your life how you wanna live it. You just need to figure out how to do it. I think it’s possible for everyone to do it. 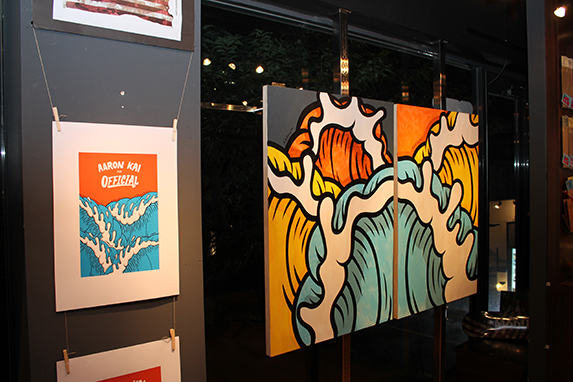 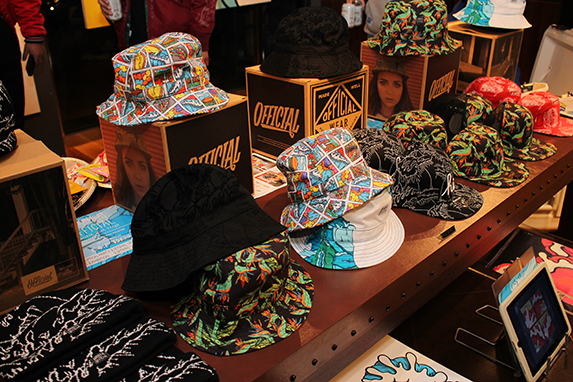 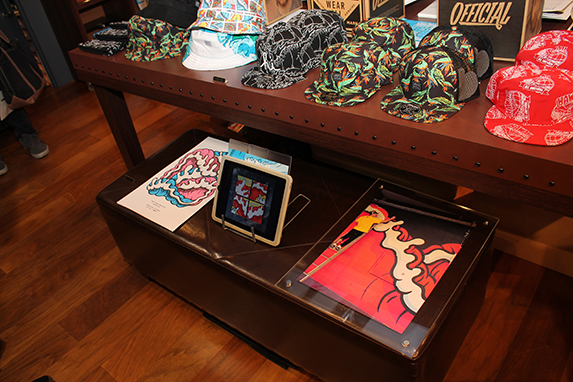 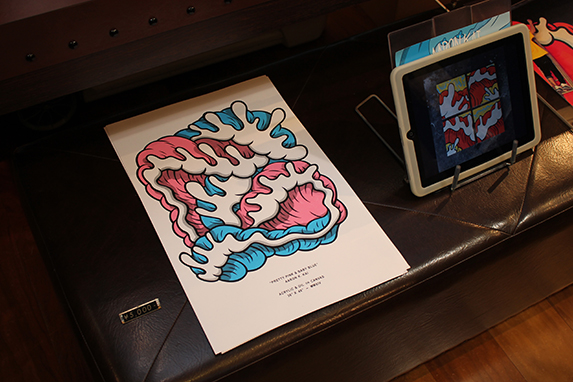 Born in Hilo Hawaii, post-pop artist known for his waves, Aaron Kai currently bases himself in San Francisco. He has just released his signature collection from Official.
@aaronkkai 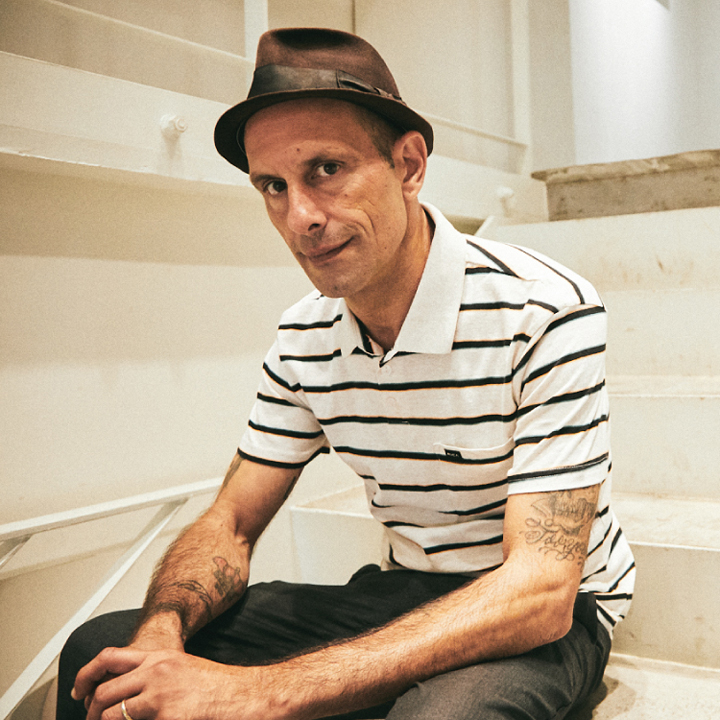