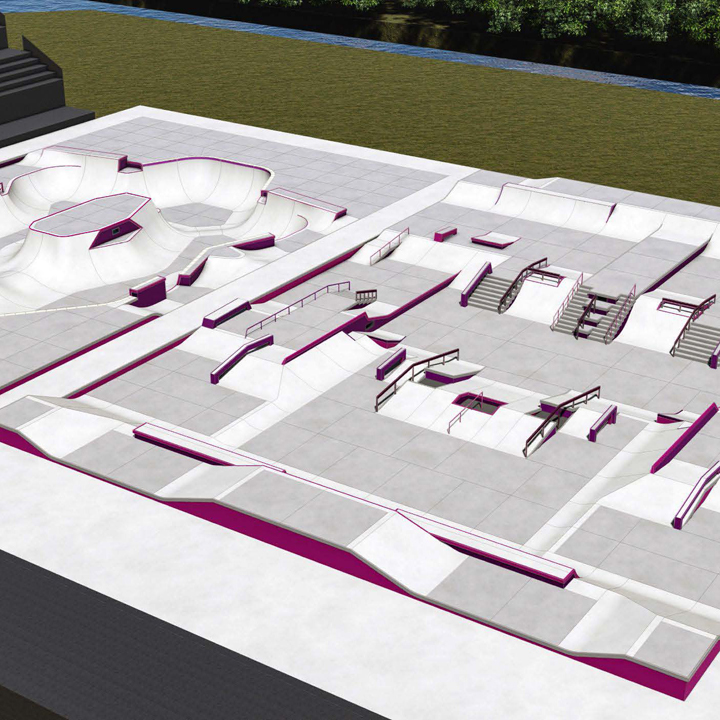 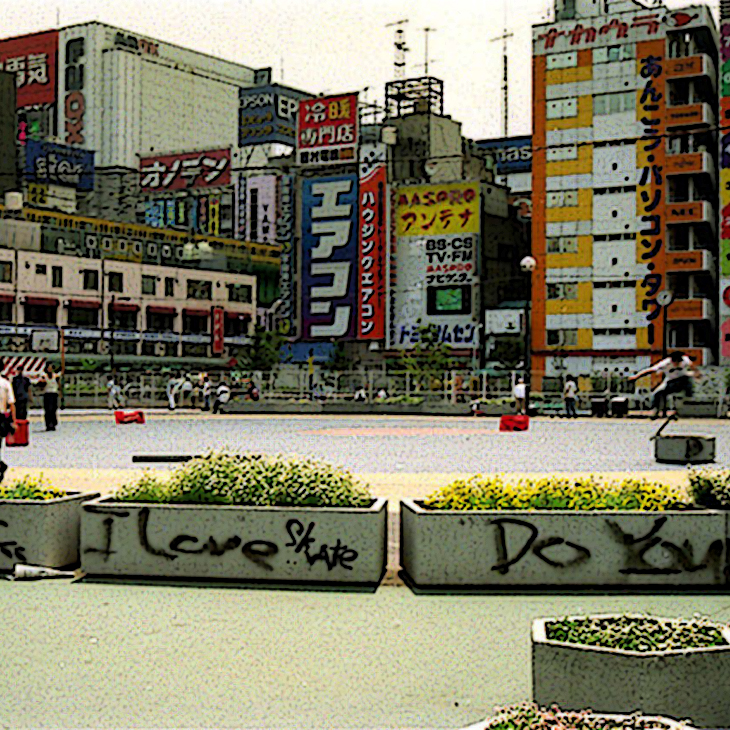 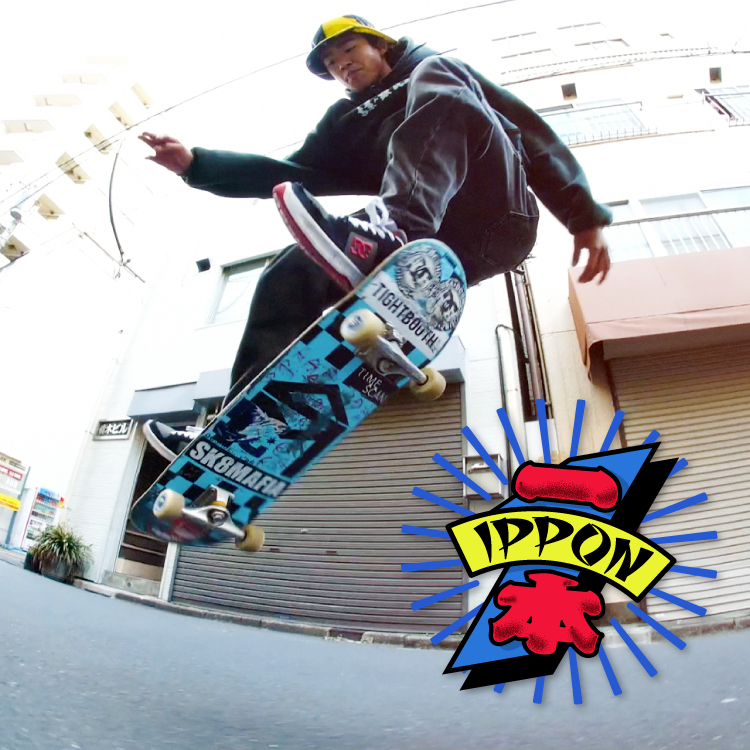 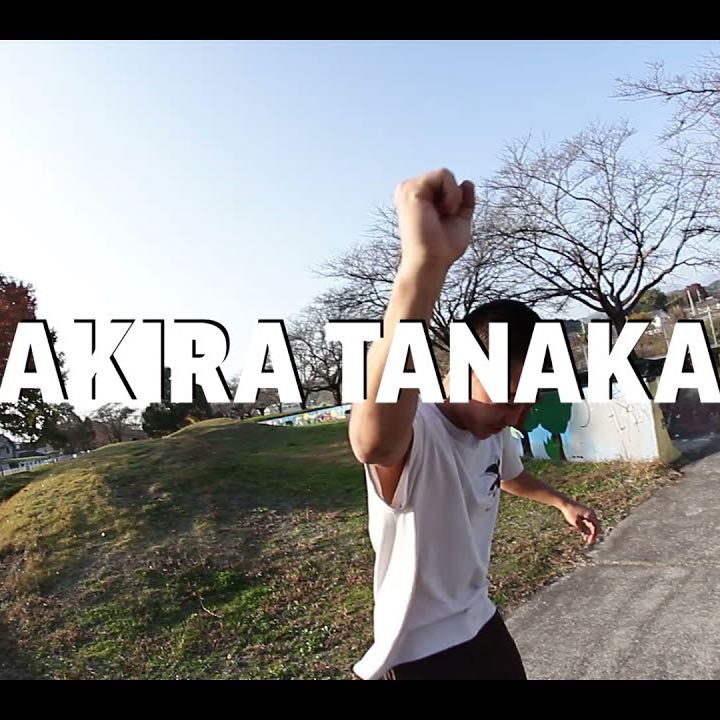 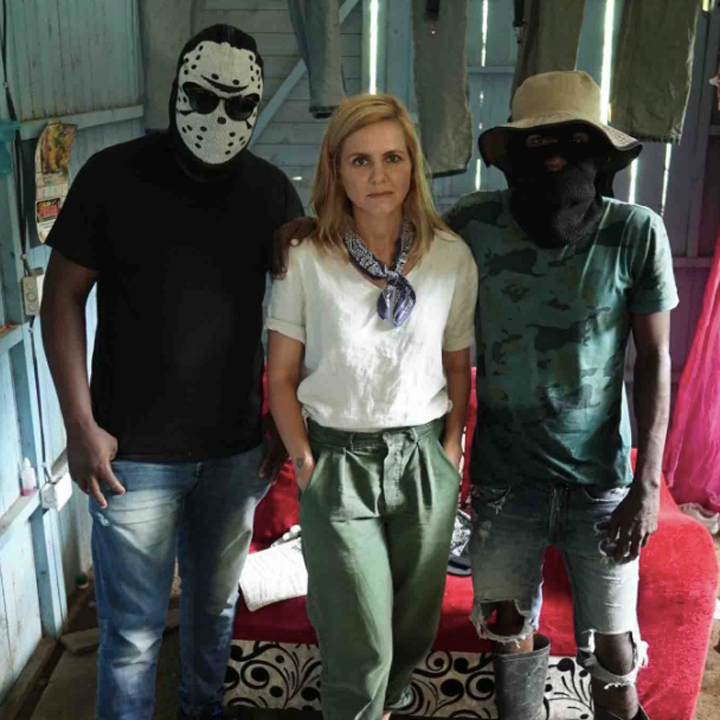 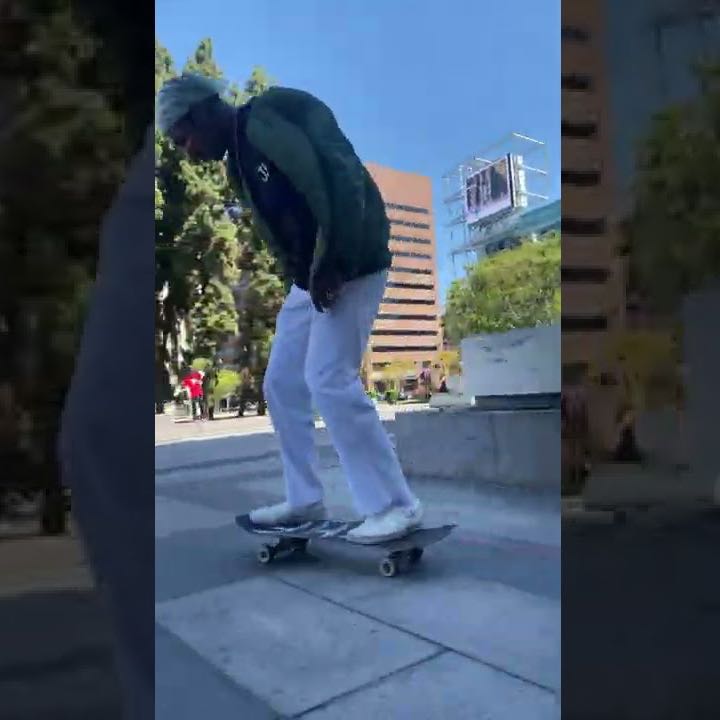 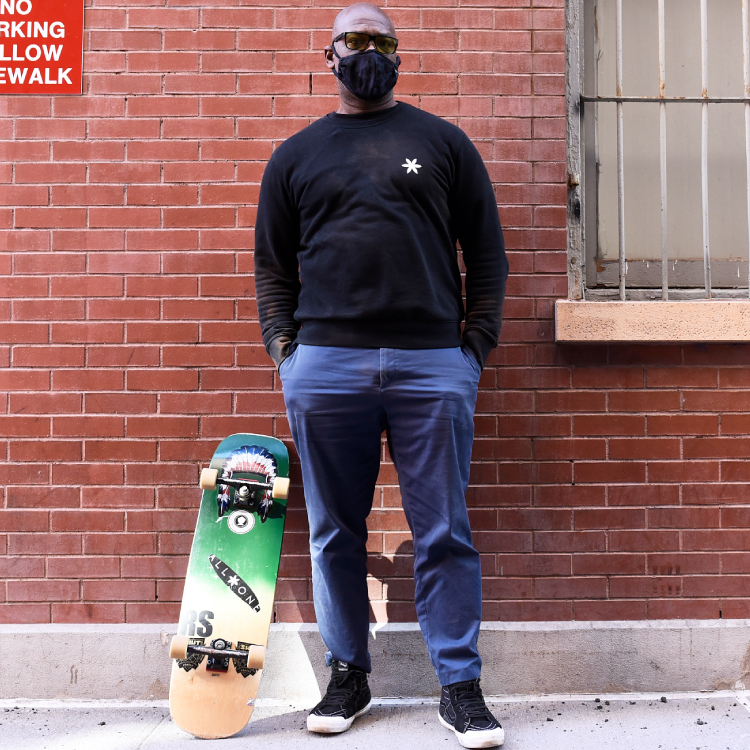 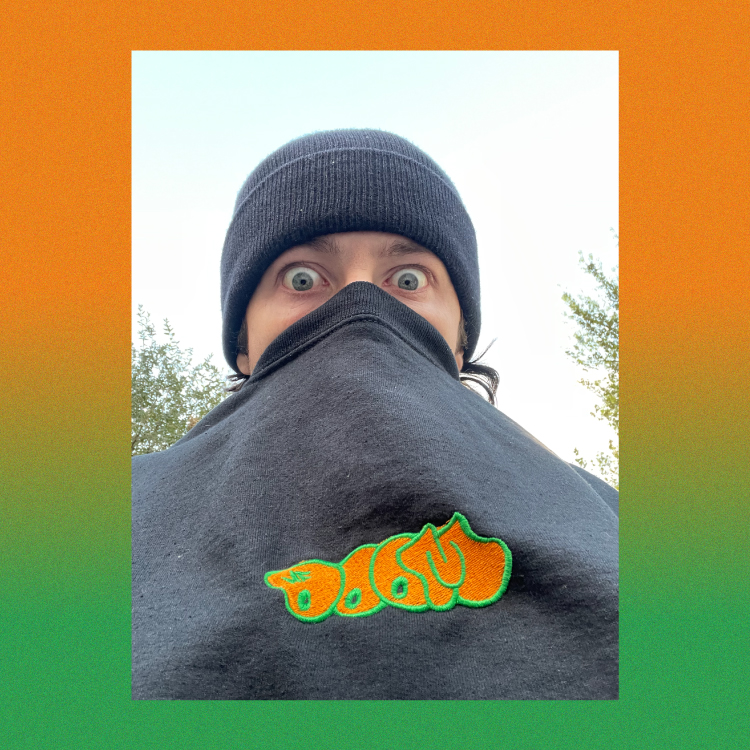 AKEEM THE DREAM has lead Japanese street culture in the '90s as the member of T19 and HECTIC, and also Zero Sophisto. We look back on his little-known life and his mark in Japanese Skateboarding.
──AKEEM THE DREAM (ENGLISH) 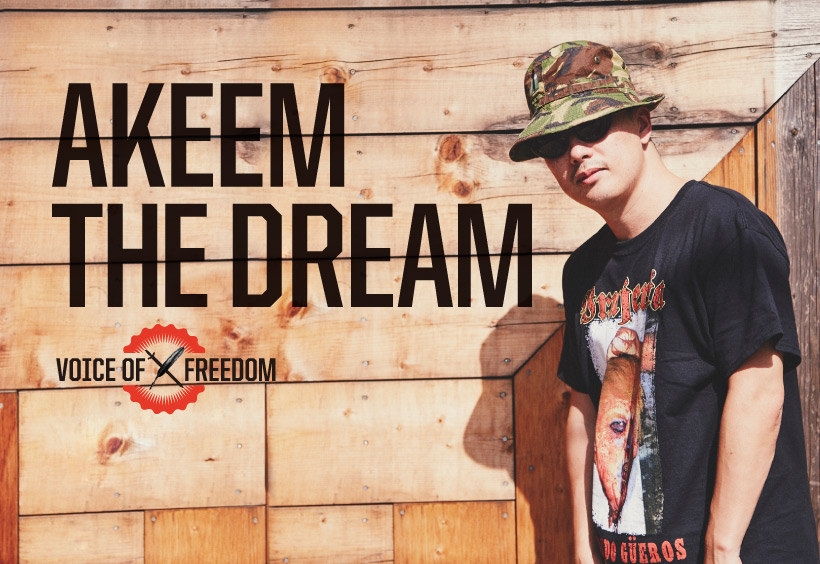 VHSMAG (V)： Firstly, where did the name AKEEM come from?

AKEEM THE DREAM (A)： There was this movie called "Coming to America" and the main role prince played by Eddie Murphy, his name was AKEEM. People said I act kind of like prince and I got the name (laughs).

V： Did you start skating when you lived n Australia?

A： Yes, I moved to Australia with my family in '84 and started skating about six months later. I went to a local mall and there was this vert ramp at a event space and had an opportunity to see vert skating. That's when I got interested in skating.

V： Where in Australia was that?

A： It was an inland city called Canberra. It was a small city and we only had two malls, but there was a small surf/skate shop. I did have a toy skateboard before that but I really got hooked with skating when I saw the vert session.

V： So skating was pretty popular in Australia back then considering there was a skate event like that.

A： No, not so much. You know, surfing is the national sport of Australia. So there's a surf shop with flashy clothes, and in the back there was this small space where they sold skateboards. I think back in the '80s, a lot of skateparks got closed down and people started to build backyard ramps. The scene was fairly small, and street skating was just starting to get popular. It was right around when Bones Brigade's "Future Primitive" came out. The scene was small but there were skaters. There was this skatepark that got closed down in the '70s and on the premises there was a trashed keyhole where people would skate.

V： So you were pretty much into the Bones Brigade back then?

A： The first influence that I got was from the locals. Trevor King, he was skating at the vert session at the mall. He was really stylish and I looked up to him. He's pretty famous in Australia.

V： How long did you lived in Australia for?

A： Looking back, I only lived there for two and a half years. I had linguistic barrier at first... maybe that's why I got into skating. I made a lot of buddies after that though. i came back to Japan around '87.

V： So how was it like coming back to Tokyo?

A： I didn't know much about skating in Tokyo but I was excited. It was when people would skate jump ramps at the pedestrian zone in Harajuku. You know, this is pretty common among returnees, but I'd get things like "Don't you know how to talk to older people?" Back then I used to hang out with Wataru Nagashima and Daikon, and all the other older guys at STORMY and MURASAKI SPORTS in Harajuku.

V： When you got hooked up with T19 in the early '90s, who were you skating with?

A： Akira Ozawa, Saluda and YOPPI. Akira and YOPPI was connected to Otaki from T19 so I think I got hooked up through them.

V： I've always wanted to ask you this, but you used to ride for Andy Howell's clothing company called Zero Sophisto. You even had a part in "Freedom." How did you get hooked up?

A： Well, back then skaters from the US would come to Japan and do demos during contests. I was skating one of the contests in '94 and Andy Howell stopped me and said, "I'm starting a clothing brand. Are you interested?" We exchanged phone numbers. He was living in San Diego and he told me to come visit. I can't remember how I got in touch with him... Maybe I actually sent him a letter or something (laughs). 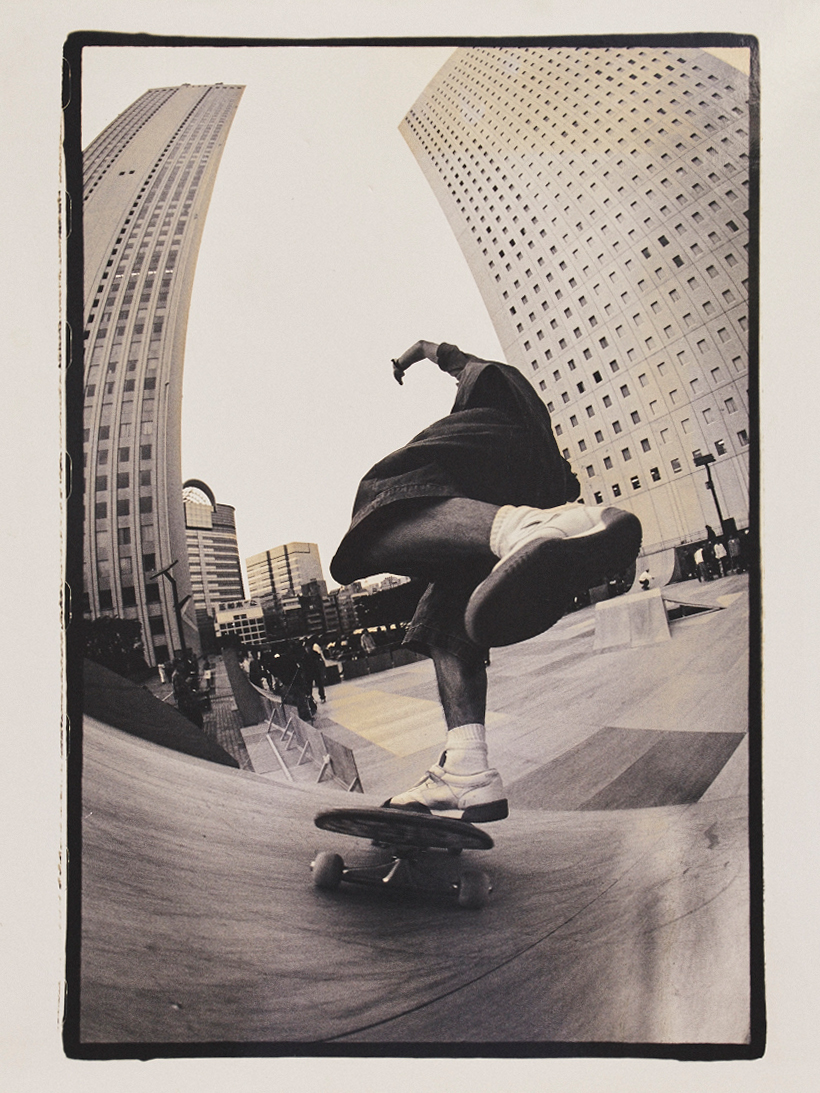 V： We didn't have Internet back then.

A： That's right. So anyway I got in touch with him somehow and he came to pick me up at the airport. I think it was my first trip to the US. It was a memorable trip. Andy told me to go shoot photo with Grant Brittain but the spots are way harder than you imagined and benches are higher than you thought (laughs). On top of that, Donger showed up, I kind of got daunted and couldn't skate. I was bummed (laughs). I thought I could do more (laughs).

V： I understand. You'll never know what the spot's like unless you actually go there.

A： Grant Brittain came to shoot and I don't think I got anything. I got to experience a lot of thing other than skating though (laughs). After I returned to Tokyo, boxes actually arrived and turned out that we're going to make a video. That's how the "Freedom" part came about.

V： So that means there was no distributor to help, you were directly on and speaking with Zero Sophisto?

A： Yes. I guess the fact that I'm bilingual helped a lot. If I couldn't speak English, I might have not been able to fly to the US. Wait, maybe I would have. It was a lot easier that I spoke English though, I can say that. Andy drove me from and to the airport, and let me crash at his place... Looking back, he was a super awesome guy.

V： Was it after that when you were involved with HECTIC?

A： No, around the same time. It turned out that YOPPI is going to curate a shop and I was there watching. Then I got to be the staff of the shop.

V： Didn't you used to do design for HECTIC?

A： That happened a few years after. That's when I started making a zine called LOVELY and got interested in design. HECTIC was located in Harajuku and it was where people around YOPPI like NIGO, Skatething, and Hiroshi Fujiwara were doing something creative. I was fortunate to actually see all that. The I thought that wanted to contribute in some way and started to find what I can do. That's when I started making zines and tried to design. I think I got moved. By the way they made thing how they wanted. Then I was exposed to all types of thing related to street culture and started to understand them. I wanted to a part of the family. 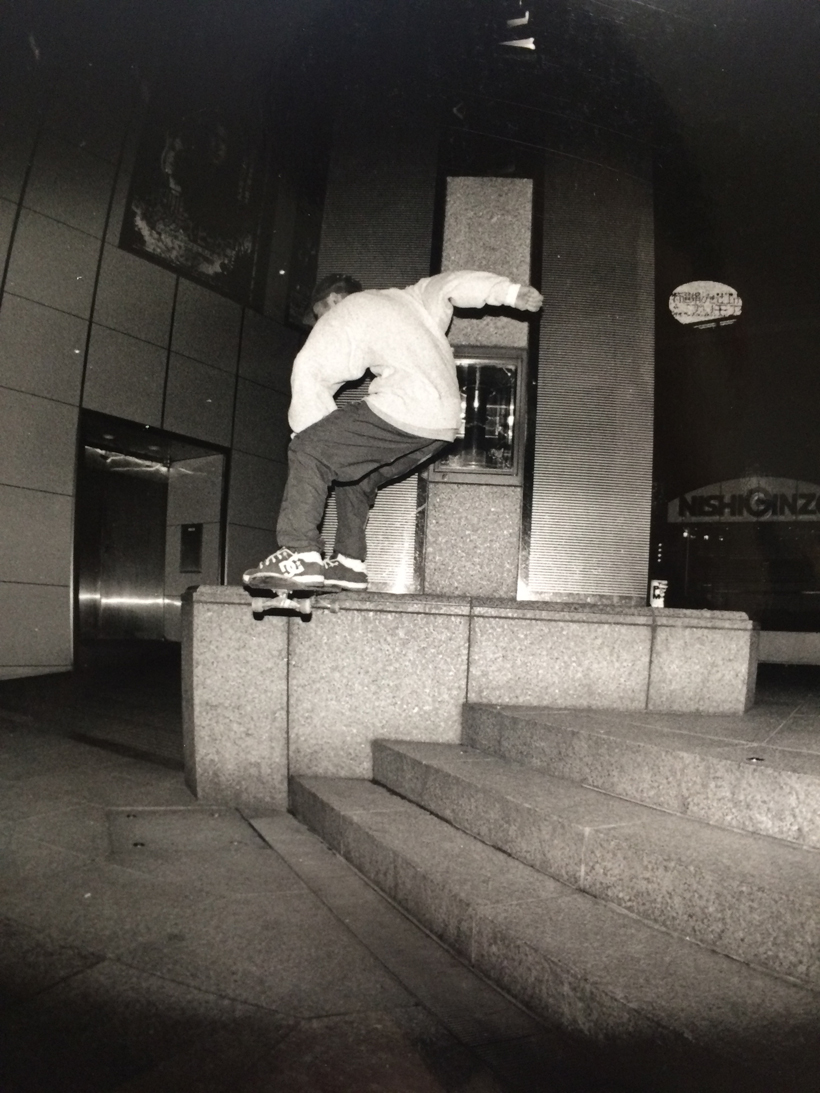 V： That's good story. The what do you think is the best thing about skating?

A： An awesome way of transportation (laughs).

V： I think it varies in each generation but who were your influences as a skater?

A： It'd be typical but the first was Lance Mountain. The "Future Primitive" video was centered around him cruising around the streets. It wasn't about the skating was good or bad, I just loved the way he cruised around. Other than that, I'd say Mark Gonzales, Jeff Phillips, Jason Jessee and Neil Blender. Especially the Gonz and Neil Blender is still putting out interesting ideas to the world. I guess it all comes back to that generation.

V： All of the skaters you mentioned are the creative type.

A： I mean, I also like Christian Hosoi and Chris Miller, but If I had to choose they come to mind first. Natas Kaupas had a good taste in fashion. I like skaters that are goofing around rather than taking everything super seriously.

V： What are some of the most memorable skate-related things that happened to you?

A： The most memorable was seeing Jason Jesse in person for the first time in Australia (laughs). Hosoi, Chris Miller, Jason Jesse, the Gonz, Eddie Elguerra, Tony Magnusson... they all came to Australia for a demo. They didn't come to Canberra though. So we took a bus to Sydney to see the demo. I was blown away by Jason Jesse's silver/green bleached hair. His skating was sick too. Other than that, I had an opportunity to skate with Paulo Diaz, Guy Mariano and Billy Valdez in the '90s, near XLARGE in LA. That's a good memory too.

V： What do you think is the best thing about Tokyo scene?

A： Speaking from my generation, the fact that skating was connected to a certain music scene. Back in Australia, punk music and skating was connected and I really liked that. The events organized by STÜSSY at a club called GOLD, there was a space with ramp so you could skate and listen to music. Cultures were crossed over at places like that and I think that was the best thing about Tokyo.

V： Maybe your taste in music and fashion got nurtured there.

A： That environment nurtured my taste for sure. I wouldn't have gone to a club if it weren't for that kind of events. I was underage but just went in and got to skated and listed to music all night long. That's how I was able to take in a lot of information. I did go to a lot of places just for skating and that was fun too.

V： So you've taken in a lot of things in fashion and music. What kind of thing from the sub-culture are you attracted to?

A： Something like anti-system and anti-rule. Something that makes you question the world. I like sub-cultures that have that kind of elements.

V： Is there anything you learned from skating that's applied to design and all the other things you do today?

A： I guess DIY mentality. If you can't find the thing you want, just make it. The idea of making zines came from skating and it's the same with re-creating clothes. Maybe skating is similar to punk music. I probably think like this because I come from a generation when skating and punk were alike. Today's oversaturated so you need the skill to select and let go of the things you don't need.

V： Lastly, what can we expect from you in the near future?

A： An exhibition "NO SHITTY ADS" will start from October 6th at a gallery space called 16 in Shibuya. It's an exhibition by FACT. and Berlin's Skateboard Museum. There will be a fun installation where you can see many skate zines that were popular in the '80s. So come and enjoy.

AKEEM had spent a couple years of his childhood and started skating in Australia. After returning to Tokyo, He becomes one of the most talented skaters in Japan. having a deep knowledge of street culture, he works creatively in skate, art and apparel community.