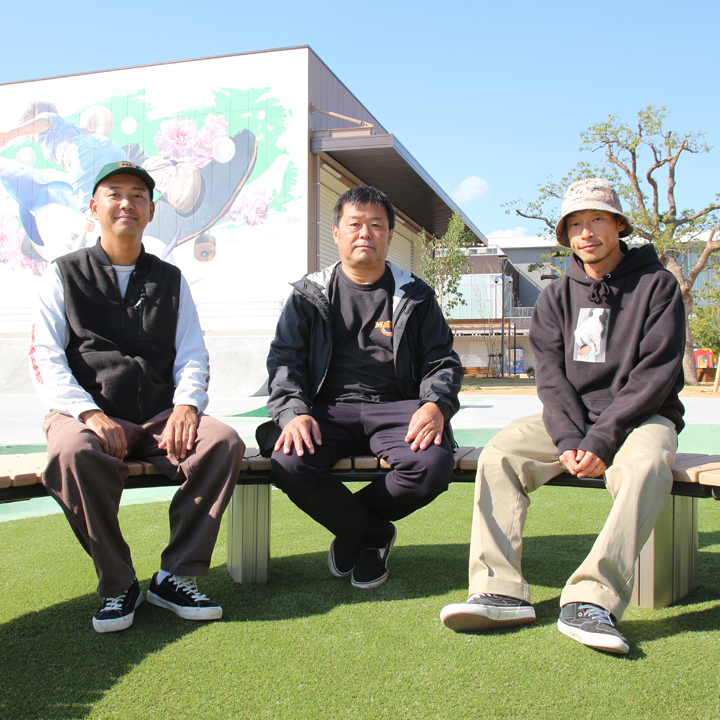 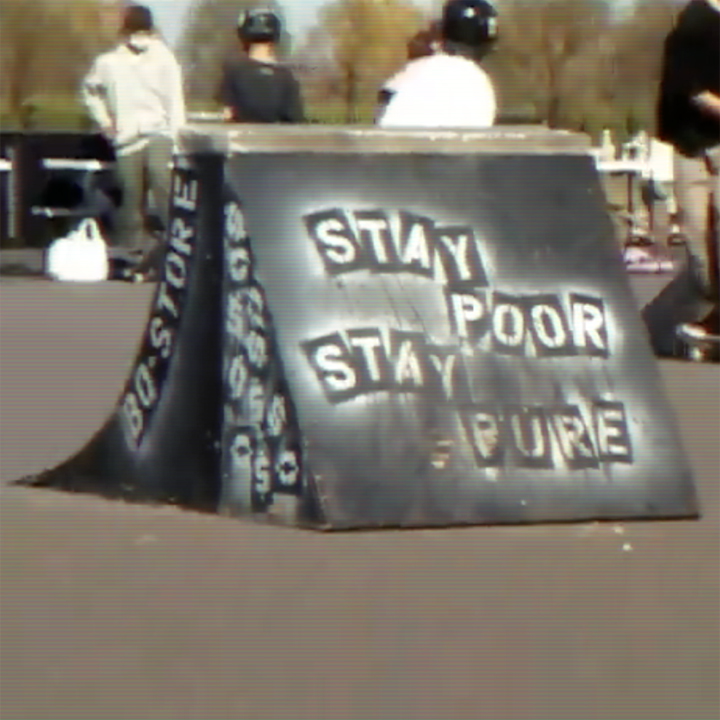 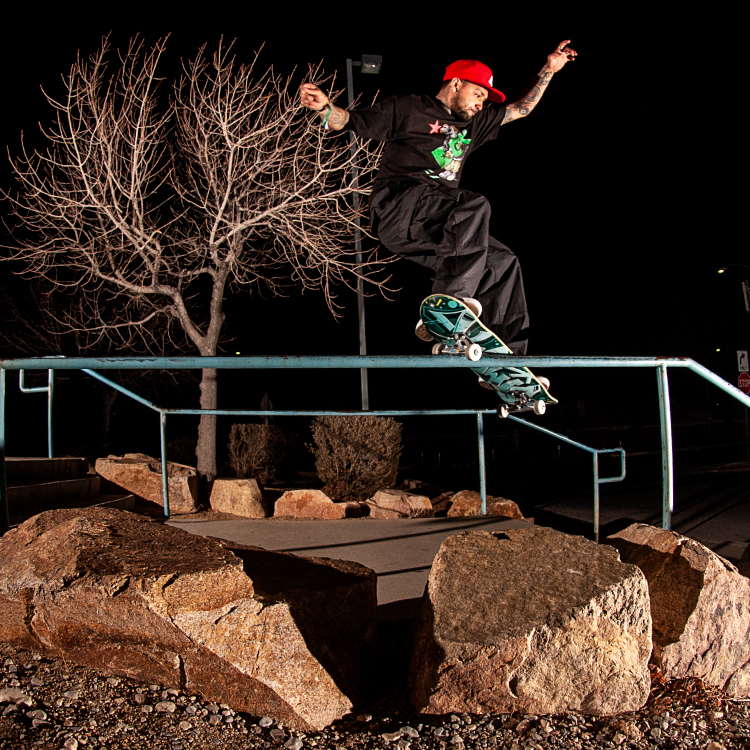 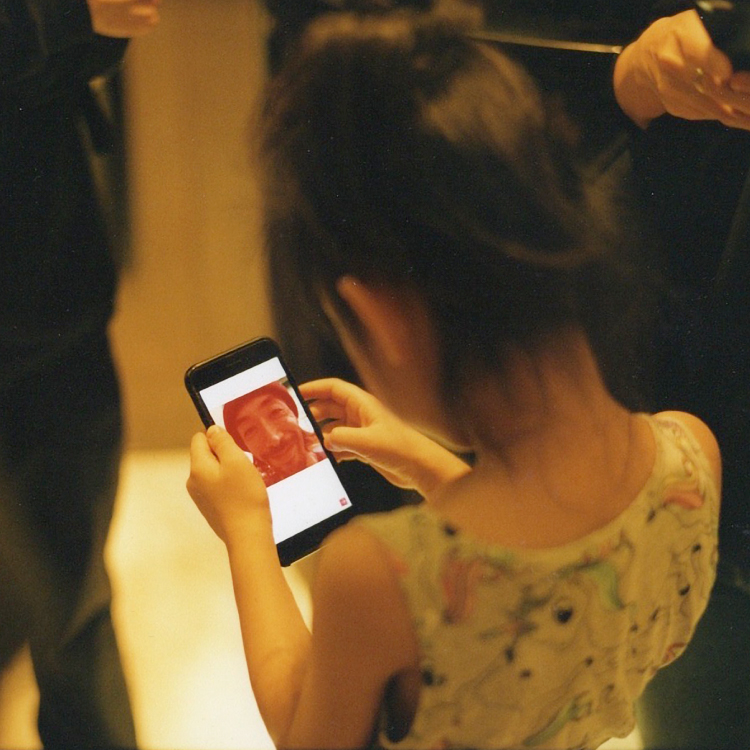 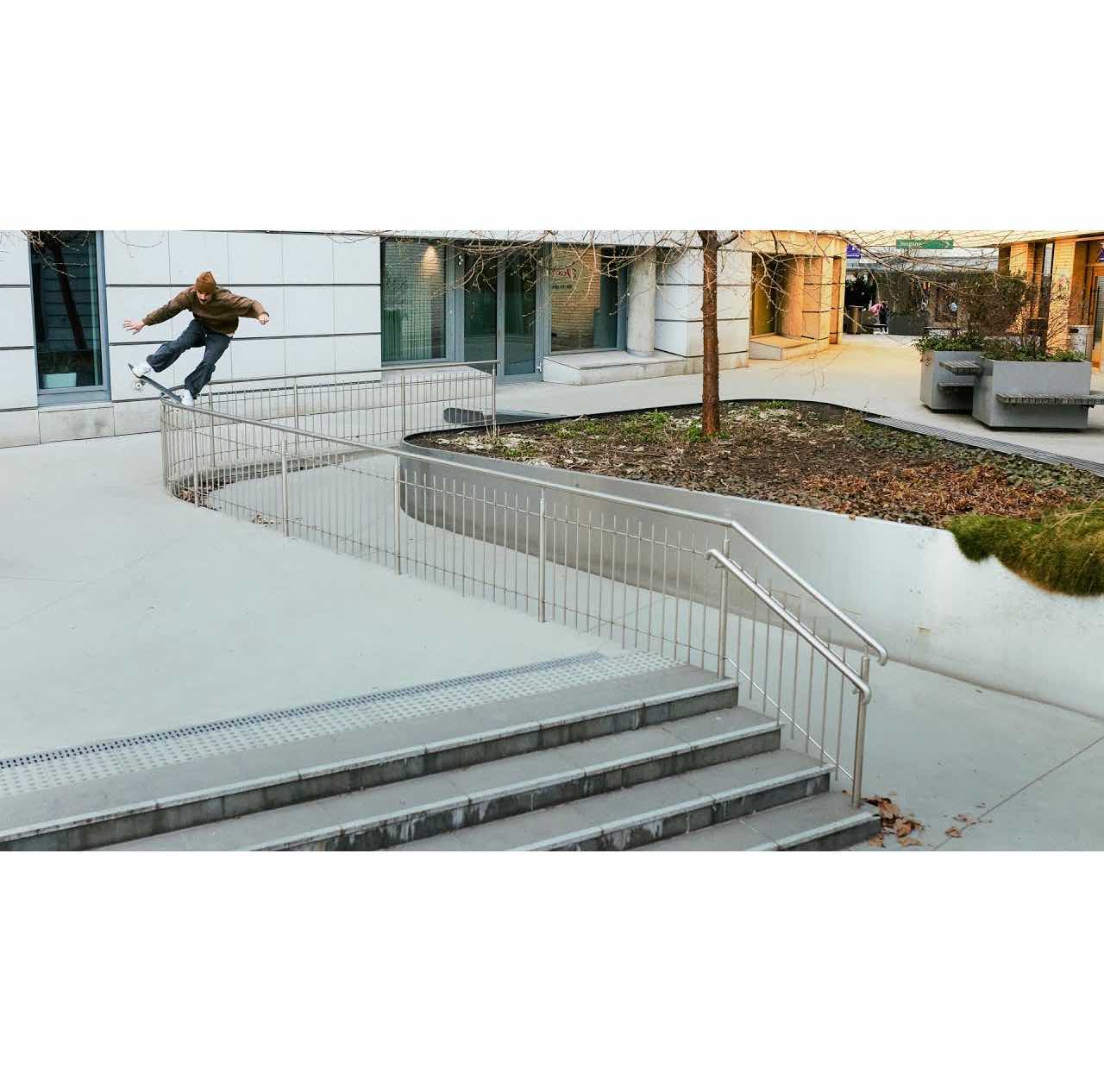 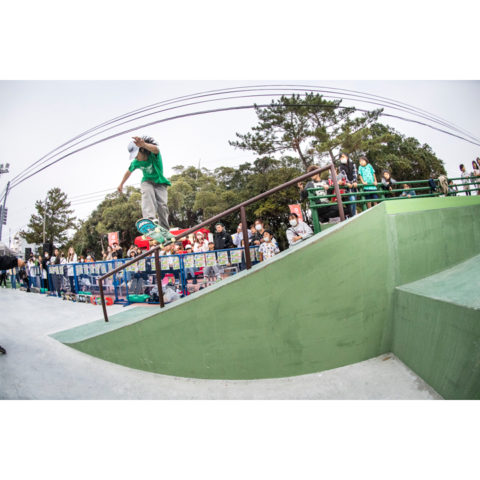 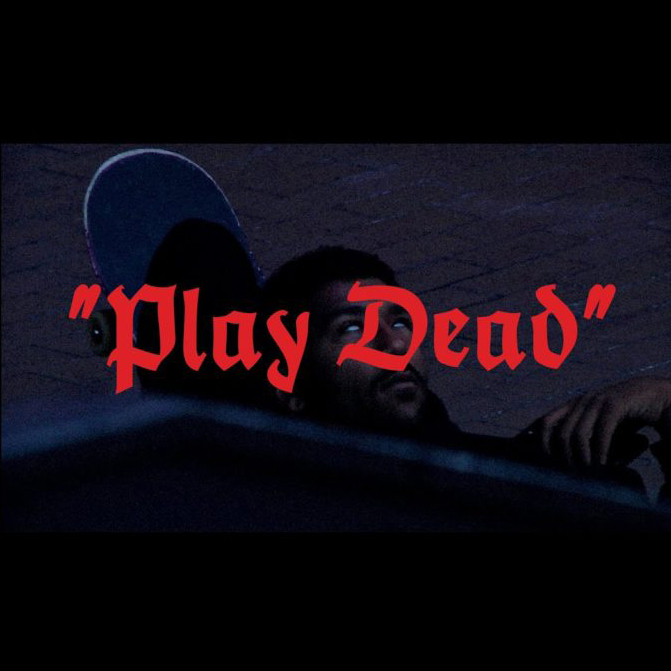 Franky Villani is known to be obsessed with horror movies. With the release of his second colorway from New Balance Numeric, we take a peek into his bran once again.
──FRANKY VILLANI (ENGLISH)

VHSMAG (V)： How did you get hooked up with New Balance Numeric?

Franky Villani (F)： I was very lucky. I randomly went on a camping trip with Levi Brown, but it was just where they'd take a couple of kids from low budget areas. And a while later, he hit me up if I needed shoes. I was like, "Yeah I do. I'd be super down." I just kind of never thought it'd be anything, kind of, but it just kind of went on from there.

F： Now he is. He wasn't back then. He was just looking out, I think.

V： You guys had that commercial for your NM213 colorway. I heard that was too graphic that Numeric Japan couldn't show it in their Instagram or something.

F： Oh, really? I forget whose idea it was, but I watch a lot of horror movies. I'm a big fan of a lot of horror movie stuff, and I think someone just thought it'd be cool if I got my head cut off. But I don't know, it's fun, but filming it was crazy. The blood is corn syrup so it was sticky.

V： Yeah, I forgot where but I saw the behind the scene stuff.

F： Yeah, they blew the syrup through a tube, so it goes psssh. The shoot was just a day. It wasn't too crazy. It was low budget but fun. I had to keep my head down and have the fake head taped to my neck.

V： How did you feel about people seeing your brain?


V： I heard you're super into horror movies and you have a whole collection.

F： Yeah. I have a good amount but I don't know the actor's names and stuff like that. Some people are super, super into it. But sometimes I buy horror movies and I haven't even watched them. The cover's sick, so I buy it.

V： How many do you have?

V： I read your interview from a couple of years ago and you said you had about 250 at that point.

F： Yeah, it's probably not much more, just because I have no more space to put them. So I had to kind of chill, but I'm happy with what I have. But if there's a new movie I see that I like, I buy it. But since then I've just been collecting the dolls, the action figures.

V： What's your all time favorite?

V： Okay. Then what's the one that you saw recently?

F： I could pick a couple favorites...

V： Yeah, something you can recommend to our readers.

F： I mean if you don't really like blood and guts, maybe watch Killer Klowns from Outer Space. That one's more mellow, but kind of funny horror movie. Other than that, the movie Scanners. The horror movie They Live. Let me see. Arachnophobia. I could keep saying more and more.


V： If people want to see guts and blood, what would you recommend?

F： Freak Show. It's banned in 43 countries for a while or something. Or Cannibal Holocaust, but that one's gnarly. I don't recommend.

V： You'll have a nightmare. What about the worst horror movie that you ever saw?


V： What is it about horror movies that gets you so hyped?

F： I don't know. Maybe there's something's wrong with me.

V： Last year you went pro for Primitive and you had a part to go with it.

V： No, it was awesome, and I really loved the Pet Shop Boys song too. You had the nose cut off in a couple of the clips.

F： Oh, it's because the wallie 5-0, the spot was brick. So when I would do the wallie, it would just catch and chip anyways. And then it was stopping me from doing the wallie because it was super rough. It was in Australia. Sydney spots are pretty rough and the cracks are big on the brick. I realized that I kept getting caught on the nose, so I put it in a crack and broke off the tip. It kind of smoothed it out a little bit.

V： But you did a big tre flip on the same board.

F： Oh yes. It's because I extended my ticket and I didn't have very many boards. So I just kept skating with it. But I don't really like that part.

F： I don't know. I feel like I could do better. Short time. It was maybe a little less than a year, but I had a film for the TransWorld video at the same time, and I was hurt. So it felt very spread thin, you know what I mean? If I had both parts for one part, it would've been better.

V： How did things go for that part?

F： Fuck, I struggled on all of them. I was kind of hurt for most of it, so a lot of it was kind of hard to film. I tried a trick in Australia, and hurt my hips pretty bad. So after that, everything was pretty hard.


V： You have a new colorway out from New Balance Numeric.

F： It's orange like a pumpkin, with a green sole. If I ever have any kind of shoe, I love color on the bottom sole. Looks so cool to me. But it's kind of the same shoe as last time, but it's Halloween again. So it's going to be a pumpkin colorway with the green sole. And then Fos, who does Heroin, he did some pumpkins on the back. Oh, actually this is one of the pumpkins from it. I got it tattooed.

V： Sick. Speaking of Fos, he did your first Primitive board, right?

F： Yeah. One of my favorite artists. And pretty good friend of mine.

V： So are you having a promo video for your colorway?

F： I have some footage, but it's up to them. But I think they'd probably want to do another horror skit. Maybe we'll do less graphic, so you guys could post it too.

V： Okay. So you have your colorway out. What's next?

F： I think there's a Primitive video supposed to come out in maybe November. I feel like everyone puts out their video in November. It's weird.

V： Everyone's going for the Skater of the Year. Are you aiming for that?

F： No. Give it to Tiago or someone.

V： So you went pro last year. How did that come about? You were riding for Zero before that.

F： Well, I guess Shane O'Neill. When he was still on, he liked my skating and he wanted me to skate for Primitive. And I know Trent McClung pretty well. He hit me up for him, kind of. And at the time I had already decided that I was going to quit Zero, and it was just kind of perfect timing. I really like Primitive because they let me do what I want. I get to pick all my graphics, and stuff like that. I have a say, a real say. I really appreciate that. I don't even really care about being pro, but if I'm going to be pro, I feel like I should pick the graphics and have a say in what happens with everything. You know what I mean?

V： Did you pick that Pet Shop Boys song for your Primitive part too?

F： Yeah. I feel like there's no point in doing something if it's not your own... I care a lot about video parts, and graphics, and stuff like that. That's why I really like Primitive. They let me choose what I want, and really let me kind of express myself. Kind of weird, I don't know, cheesy way to say it.

F： I feel so lucky to be here. Everything's great. They really care, and they listen. They just want what's best for you. And I don't feel like that's how it is with a lot of skate companies. So I really appreciate that.

V： Other than that, what makes New Balance Numeric different from other stake shoe brands? 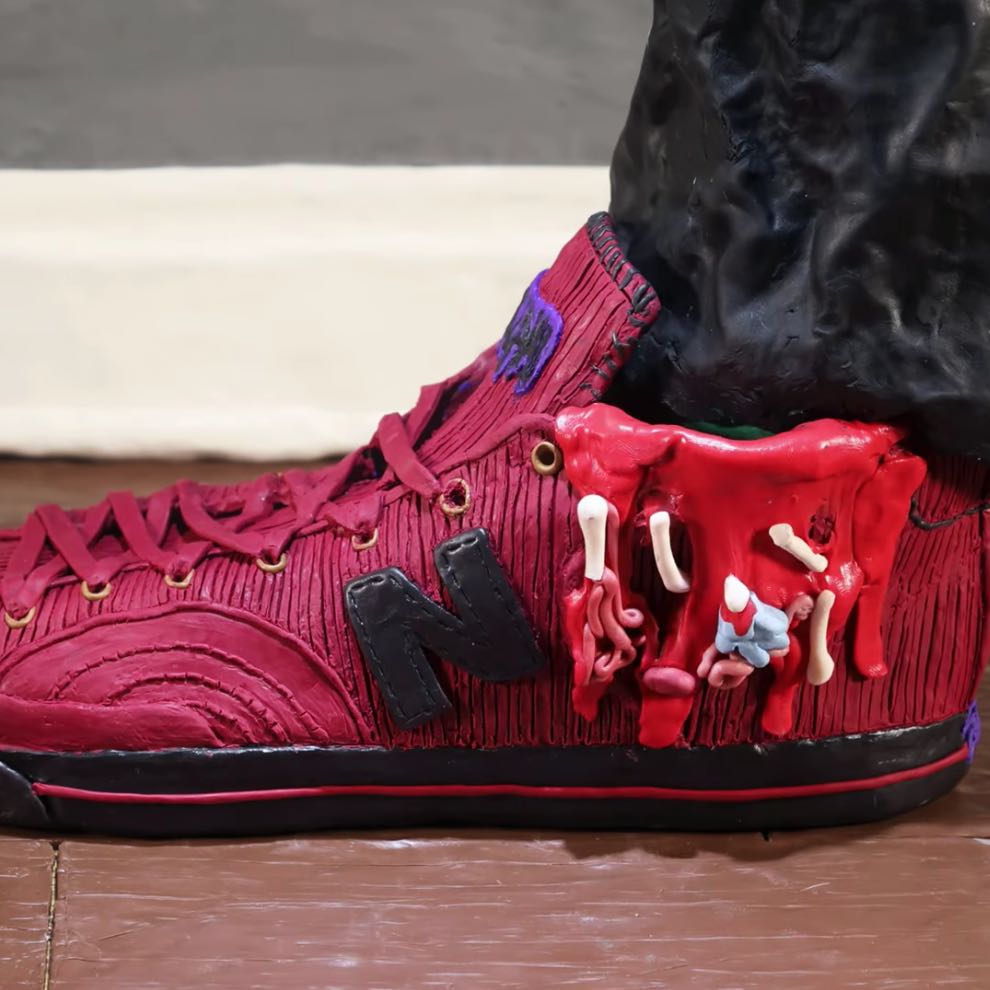 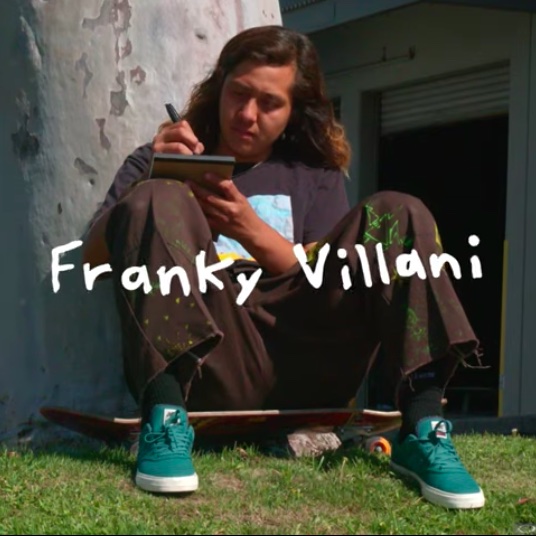 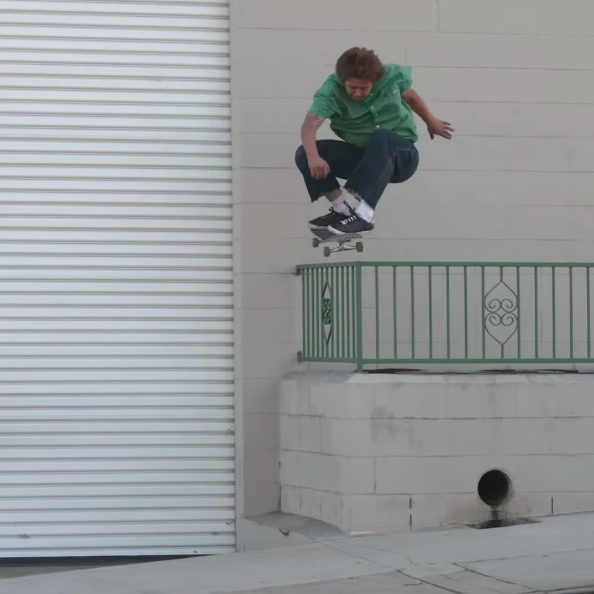 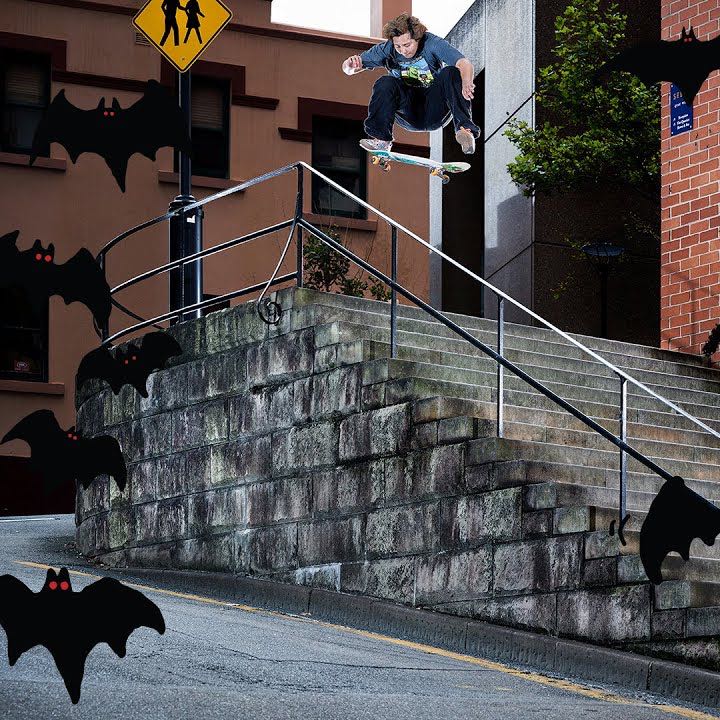 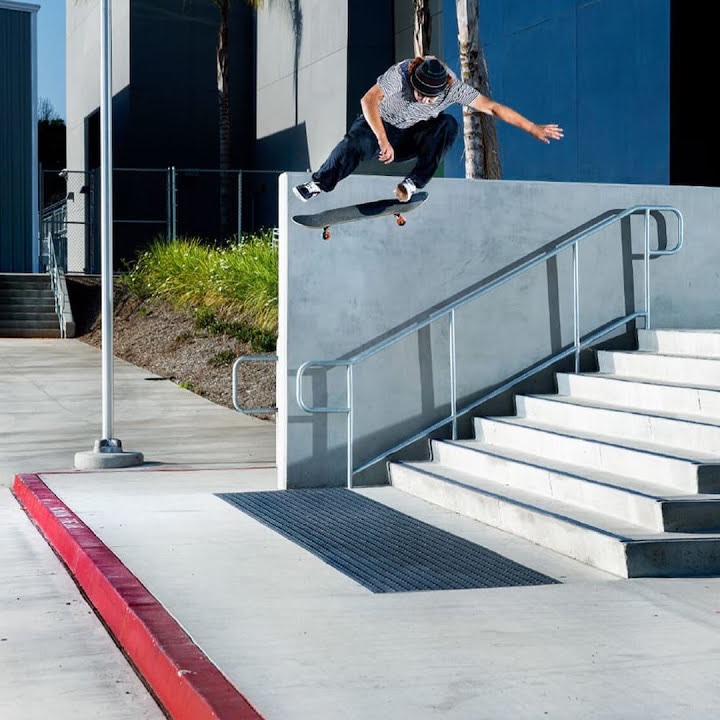 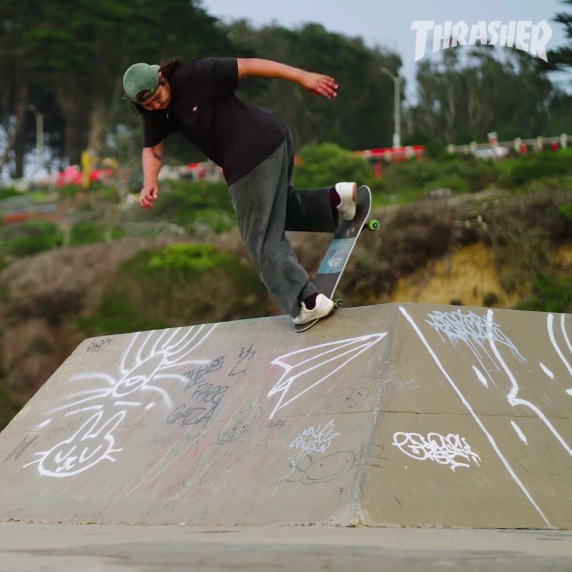