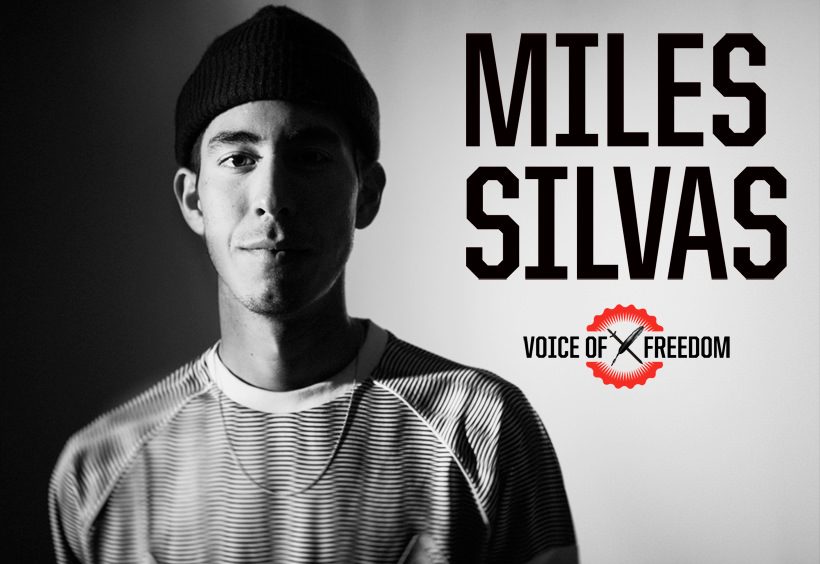 Right after having the last part in LRG’s 1947 last year, Miles Silvas is about to drop his full part two years in a row in the much anticipated Away Days by adidas Skateboarding. We caught up with Miles via FaceTime and had him look back on his away days.
[JAPANESE / ENGLISH]

VHSMAG (V)： When did you make your moved to adidas Skateboarding and how did you get hooked up with them? What was the transition like?

Miles Silvas (M)：I think it was 2014. It was pretty easy, actually. I was going on a lot of trips with Rodrigo TX. He rode for adidas, and he just mentioned one time like, "Yo, what's up with adidas, we can try and make it happen," and then I was like, "Damn, that would be sick." Then I just kept skating for Lakai, and then eventually I got in contact with Yasha, the brand manager and we just talked it out. It just seemed like the right move. My whole family really likes soccer and TX is on the team. The brand made more sense, to ride for them, because I could also be hyped on the shoes I wear. I really like the team; also my family could wear the stuff and be hyped. It was just the whole thing, but the transition was pretty easy.

V： How did you feel about the way you were introduced, as one of the three stripes with Nakel and Tyshawn?

M： It was sick. It was tight that they were all getting on at the same time I was, because we're all around the same age. It's cool to have new guys that are young and wanting to skate, and skating together with them is tight because everyone gets hyped. It was cool.

V： So you're done filming for the Away Days video. How do you feel right now?

M： I feel good, I feel pretty relieved that the filming is done. It's been a long time filming for it, and a lot of trips. I'm excited to see the whole video. I want to see everyone's footage and the whole thing complete.

V： Is there anything you wish you had done for your part, or were you able to give it everything you got?

V： I'm pretty sure you've been asked this so many times, but what's the story behind the title Away Days?

M： The title behind Away Days is just, it's a soccer term from teams being on the road playing their away games. They would call those the away days, and they made it a part of the skate, just because we've been gone so much, going on so many trips. Every month. It's just away days. All the footage is from our time away.

V： When did you start filming for the video?

M： I went on my first trip with adidas, and I filmed some stuff on that trip, and then that went towards that New Stripes video. Pretty much after that trip is when I started filming for the video. I was still filming for the LRG video, but I was also going on trips with adidas and trying to do stuff for them. It's pretty much been a year and a half I've been filming, maybe a little bit more.

V： Like you said, you had your LRG video as well, and that was a heavy one, last part. You were filming simultaneously?

M： Yeah. That video was getting wrapped up while Away Days was starting to be filmed, so I would go on a trip for LRG and film for that, and then I'd go on a trip with adidas and film for that at the same time. I had to think about tricks a little differently like, "All right I need to do something different for adidas, because it's going to come out after LRG." It was just weird, but I was doing them at the same time.

V： You've been on so many trips now, especially for Away Days. How many trips did you go on for this video?

M： A lot. Too many to count. Probably over twenty, probably thirty trips. It's been a lot of trips.

V： Any memorable one?

M： All the trips to Europe have been sick. We did one trip to Barcelona where the whole entire team was there with adidas for four days. It was almost thirty of us, and that was pretty crazy. The team is so big. There’d always be some people on one trip, and some on another trip. It's different every time. Having the whole team, that was pretty crazy.

V： Who do you kick it with during tour?

V： You were in Okinawa for the video too, right?

M： Yeah, it was this year. It was just a couple months ago. We skated a lot there. It was pretty fun. I was with Silas, Alec Majerus and Lem Villemin, and I think that was it. It was like four people. I was with a small crew.

V： Did any of the footage from Okinawa make it in the video?

M： Yeah, there's some Okinawa footage for sure in the video.

V： Cool. Looking forward. You were constantly travelling for the video. How were the days like? Did you ever have time to relax with your family and girlfriend?

V： How did you keep yourself motivated?

M： I'm just always having fun skating, so that's what makes me keep doing it. If I weren’t having fun, I'd probably stop skating. There are always new tricks to learn, so I'm just trying to progress and keep having fun.

V： Everyone on the team was making the last minute trip to get the last trick, and you were with TX. Where did you go with him?

M： I went to Brazil. I got some tricks done that I wanted to do. It wasn't like I had tricks in mind that I wanted to do in Brazil, but those dudes were going, it was going to be a small crew, so I was like, "All right, fuck it, it'll be fun to go out there." I ended up getting some tricks that I really liked for my part, so it ended up working out.

V： When you’re on a filming trip, it takes time and a lot of money to get certain trick that you want. Do you ever feel the pressure?

M： I was trying one trick that I wanted to do really bad for the video, I didn't end up doing it. That was a lot of pressure, just because I had already been there a couple times. I was just trying to not go crazy, but I didn't end up getting the trick. I wish I would have, but I don't know, I just try to not think about it too much. Most of the tricks you try, you can usually do, so just try not to over think it.

M： The best thing about adidas is probably just being able to travel with a huge team, and all the dudes are from a bunch of different places. When we go on trips, everyone's all excited to be with each other and skate and shit. It's pretty tight. The gear and the team is cool too.

M： The shoe that I'm skating right now is the Dorado ADV Boost.

V： There's a rumor that you’re going to ride for Palace since you were wearing their gear on Instagram. Is that true?

M： There's no plans yet of riding for Palace. Everyone thinks I'm going to ride for it, but a lot of the adidas clothes coops with Palace, that's why I have the gear. I'm just wearing it because it's sick. Benny and Chewy ride for it, and they ride for adidas, and I don't have a sponsor so I can just wear it all I want.

V： Okay. Any project lined up after the Away Days release?

M： Not that I know of yet. I know I have a color way coming out, and that should be coming out pretty soon. That's all I know for product wise. Other than that, I'm already filming for it right now, but I'm doing the Berrics’ Push project, so I'll be doing a part, and that comes out in December. I'm already working on something else. I'm going to be doing Street League pretty soon this year. I'm just going to be filming a part and doing contests. It'll be pretty cool.

Sacramento native, Miles Silvas is known for his effortless style on his board, from tech to hammers, on all terrain. His recent work includes LRG’s 1947 and adidas Skateboarding’s Away Days.
@milessilvas