The biggest misjudgment of Japanese skate community.
The quick feet creeping up from the world's rear window.
──SHINTARO HONGO (ENGLISH)

VHSMAG (V)： How did you started skating? Your dad was a skater, right?

Shintaro Hongo (H)： Yeah, he got me into skating. I mean we always had a board in the house but I was just butt boarding. I started skating around the fourth grade in elementary school.

V： Where was your home spot?

H： Umikaze Park. I was skating with Yudai TV and Rio Morishige since elementary school days. I've been with them for a long time (laughs).

V： I heard you had all these little skate obstacles at home.

H： Yeah, we had a little bank in the front yard when I was in the fifth grade... We had a super tight mini ramp in the house when I was in junior high school. We had on outside but our neighbors complained about the sound and my dad decided to build one inside (laughs).

H： He could build all these things so we had a lot of obstacles at home. Low flat rail, super tight bank, small spine... growing up skating all these little stuff helped me learn to skate weird street spots.

V： Your main sponsor is DC, right? How did you get hooked up in the first place?

H： Brandon Turner showed me to a lot of people when I was in California and DC team manager, Jimmy Astleford was one of them. Then Jimmy talked with DC Japan so pretty much he hooked me up.

V： Your dad was close with Brandon Turner, right?

H： Yeah, Brandon used to live in Japan back in the day and they used to skate together. He used to live super close to my house. I wasn't even born yet though. It was when Brandon wasn't famous, when my dad was in high school.

V： After you joined DC Japan, you were skating with the global team in the US.

H： That was probably in the beginning of last year. I had already met Wes Kremer and T-Funk. We skated at TWS park but my truck got broken... He gave me one of his and I got a little clip.


V： You were on EU tour with DC global team in June. How did you end up joining the tour?

H： It was a Japan tour at first and I was supposed to join them, but things didn't work out and they ended up going to Europe. DC Japan got me flights.

In the end that was good for me. I had tons of time to think alone.

V： The skater on the tour are all bests in the world. How was the tour?

H： Well... Can I start from the first day when I left Japan? I got to Narita and tried to get my ticket but the machine didn't seem to work... I ask the staff and it turns out that my flight is from Haneda. They had a bus to Haneda so I tried to get the ticket but my debit card didn't work. My card was fucked up and they couldn't read it. I was planning to spend two months with it so it was a state of emergency for sure. So I withdrew as much cash as aI could and exchanged everything to USD. I had to spend two months with it. I was in a hurry so I couldn't even get travel insurance...

H： Yeah, so anyway I arrived at San Diego and I had my chin cut wide open. I slipped when I was skating a bowl at a skatepark. I didn't think it as serious but blood started dripping. I didn't have travel insurance so I couldn't go to the hospital! So I had bandage on my chin all the time. I was in San Diego for about a month and half before leaving for the EU trip. Brandon let me stay at his house. There was a skatepark about 15 minutes away so it was a good environment.

H： I had a phone that worked in the US but after two weeks there I lost all my service. I couldn't get reception until I got back to Japan. It was useless and I couldn't prepare for the trip... Brandon's house had wi-fi but my room was too far from the router and I couldn't use my phone. So I had to be standing in the living room or sitting on a bench outside to use my phone. But in the end that was good for me. I had tons of time to think alone. I read books, I wrote down things that I felt and all my inspirations. I couldn't speak Japanese for two months. When I got back to Japan, I was like, "Japanese is fun! Words come out like flood!"

V： You haven't even arrived Europe at this point (laughs).

H： I had make money somehow before going to Europe, so I was hustling at the skatepark. The off we go to Europe. I had about $500 at this point. I exchanged about $300 at the airpot in London and joined the others. We went to a skateshop and everyone was wearing Polar pants. It was so dope and I wanted one too, so I bought a black cargo. I thought I had enough money. I look in my wallet and realized that I didn't have much. The thing is, I got ripped off at the airport when I exchanged money... I don't remember filling out a form or anything, I just handed cash to the guy and he was like, "This is enough, right?" I was an easy target (laughs).

H： I can't speak English well enough and returning the cargo pants wasn't an option... So I lost most of my money the first day (laughs). Bordeaux was fine but I lost all my euros in Luxembourg. I had $200 but for some reason I couldn't exchange USD to euro at any bank. I have this memo I wrote at the hotel there... (laughs).

H： "When I woke up I only had 15 euros and some change. I wanted to have breakfast the next morning, so I woke up at 8am. I got my breakfast on my plate and it turned out to be 15 euros. I lost my 15 euros."

H： We didn't have to film that day and we were going to the lake to swim. I was stoked but when we got there, they say it's 5 euros to get in... I lost all my change and couldn't even buy a toothbrush (laughs)!

H： "I have about 200 euros if I can exchange. I can't exchange at this hotel so I will do it at the next airport. I don't bring extra clothes so I'm wearing the same underwear for three days. It costs money to rent a phone charger in this hotel so I only have 1% battery left."

V： So you're pretty much broke. I'm surprised you survived the trip.

H： John Gardner was on the trip as team manager so he helped me out a lot. He bought me meals. It was tough not being able to spend money. I wasn't stressed that I couldn't use my phone at this point because I was already used to it in California.

V： You were rooming with T-Funk, right?

H： I was with T-Funk in Bordeaux, Luxembourg and Antwerp, so pretty much most of the trip. In Berlin I was rooming with Tiago Lopez and Tiago Lemos. They were speaking in Portuguese... I had no idea what there were saying (laughs). But they all tried to speak slow so I can understand. That helped a lot. I'm thankful for that.

V： How long was the trip?

H： Two weeks total. I feels short but it was actually long. It was fun.

V： How was hanging out with T-Funk? He's one of your favorite skaters, right?

H： It was hard to understand what he was saying with all the slang but rooming with him was fun. At the end we were like, "Yo buddy!" I was down with whatever. I was like paradise.

V： You got a lot of survival skills in this trip. How was the trip looking back?

H： It as a great experience for me. The main purpose of the trip was to film and I couldn't get much. But everyone didn't seem to care too much. The best thing for me was that I got to be friends with everyone. I think this will lead me to the next opportunity. When filming, I did my best at spots where I could do my stuff.

V： What did you learn in this trip?

H： They all had strong character. I think the style and the way you present your skating has to a lot to do with the character. I want to be influenced by them more... I want my conscious level to be more closer to them. I want to go on a trip with them again. I want everything positive about them. I feel rich in heart after this trip with all the great experiences.

H： I mean, everyone was doing all these crazy things and no one gave a shit. You are what you are and people accept you for who you are. They all have their idea and they go with it. Maybe I learned that kind of thing. Who cares what people think, you know?

V： What was memorable from the trip?

H： This weekend in Bordeaux was crazy. There was a DJ booth facing the street and they were playing music super loud. Some people were singing along. I was hanging out with Wes and he got super drunk. I took him back to the hotel and stuff. We had a blast in Berlin too.

V： You had edited clips of the trip on your Instagram.

H： That was bits and pieces from the trip. You see that and you get the vibe. The music was something that was playing during the trip so it mean a lot to me. It was amazing. Four days in Berlin were straight up party. We had this big DC bus to take up around spots. Wes and John was grinding this turntable at baggage claim in an airport, and people watching clapped their hands. That never happens in Japan (laughs).

V： So what's going to happen with the clips you guys got in Europe?

H： I think it'll be released this Autumn. It's going to be a Europe video.

V： It seems you stepped up your game with this trip. Okay, let's talk about your new part. When did you start filming?

H： IN February last year, I visited San Diego by myself and met up with KE and ZAMA in LA. They were in California at the same timing. That's when I filmed the first trick. Anthony Acosta showed us around and all the spot he took us were gold... he was amazing. I also filmed in Taiwan. I finished filming in May so it took about a year and three months?

V： What was the most memorable trick from the part?

H： I guess the trick I got at the last minute. I was trying it at a different spot but I landed it super quick when I tried it at other spot. That’s how the shoot ended. I was supposed to leave for California right after that so I was stoked.

V： Well I guess it's better for people to watch the part than to talk about it. Okay, let's wrap this up. Anything in the works?

H： I want to get a driver's license. You need to be able to drive to get by in San Diego. Other than that I want to share a house with Yudai TV in Yokosuka. If we lived together Yokosuka and other cities' connection will be way stronger. That's pretty much about it (laughs). 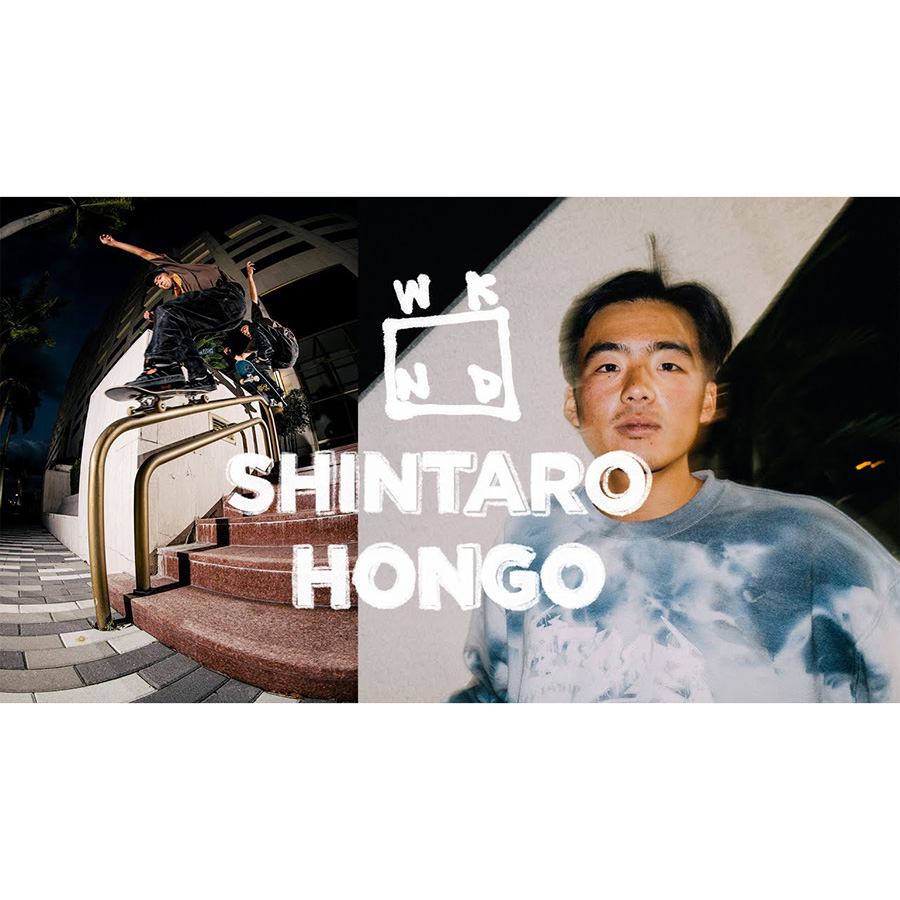